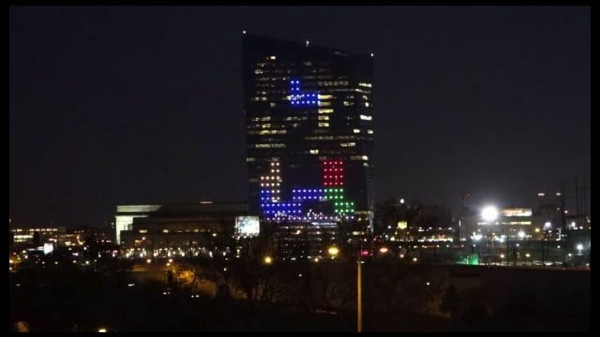 Philadelphia Tech Week is adding the world’s largest game of tetris to their lineup this year and it sounds awesome! Via WTSP.

The world’s largest video game “screen” is coming back. It’s actually the facade of the Cira Centre, next to 30th Street Station, where the Guinness record was set last year with ‘Pong.’ Next month, there will be a new game and even more playable real estate, as KYW tech editor Ian Bush reports.

Tetris is growing to new heights on the 29-story skyscraper.

“We’re going to have two games, one on each side, going at the same time. People playing against each other, people playing cooperatively. Cooperative Tetris is done by having one player control the lateral movement, left and right, and the other controlling rotation. So you and I have to work together to place that block,” says Frank Lee.

Lee, the world recordholder and associate professor of digital media in the Westphal College of Media Arts and Design at Drexel University says he’s using Cira’s north and south-facing LEDs to create the blocks and rows with more game information displayed on the narrower east and west sides. Pong, by comparison, was played on just the north facade.

Thanks to Chuck Slotter for sending this in!