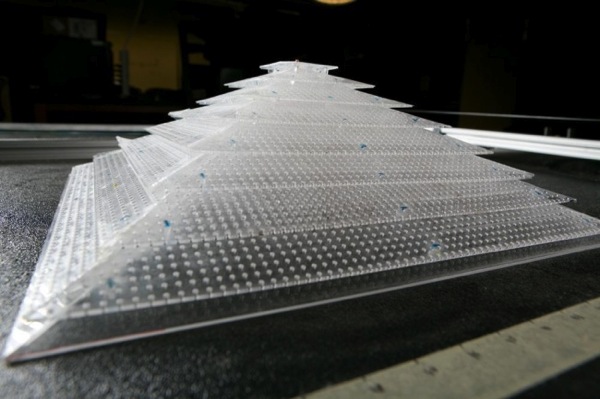 Researchers at Duke University have developed a 3D device that completely shields itself from being detected acoustically. via digital trends:

We haven’t quite figured out how to build an optical invisibility cloak just yet, but researchers at Duke University have now successfully created the world’s first 3D omnidirectional acoustic invisibility cloak.

In other words, they’ve invented a device that will not bounce back sound waves that strike it, no matter what direction they come from. This effectively renders the structure (or anything beneath it) completely invisible to sound-based detection methods like sonar.

The structure, which looks like a futuristic hybrid of a pyramid and a pagoda, consists of stacked layers of perforated plastic. The geometry of the cloak, in addition to the placement of the holes, is designed to very precisely control the propagation and reflection of sound waves that strike it. The idea is that when sound waves hit the structure, it alters the trajectory of the waves in such a way that they aren’t returned to their source. It’s essentially the same concept used in stealth fighter jets, except designed for sound waves instead of radio waves.

Speaking with ExtremeTech, Steven Cummer (the leader of the project) said that despite the cloak’s relatively simple appearance, “We put a lot of energy into calculating how sound waves would interact with it. We didn’t come up with this overnight.” He doesn’t go into great detail on how he and his collaborators arrived at the final design, but we suspect there was quite a lot of computer modeling to test different hole sizes and geometric arrangements.