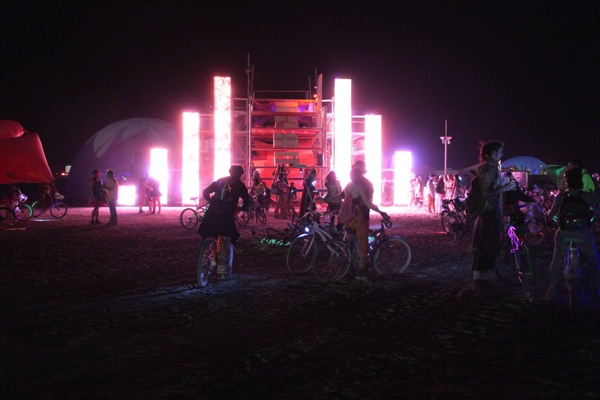 When you think of Pyramids in the middle of the desert, you think of Egypt—not Nevada. The Disorient Pyramid, which was on display at Burning Man 2013 this year in the Black Rock Desert of Nevada, is changing all that.

This year at Burning Man, the Disorient Camp hosted a 23-foot tall pyramid with more than half a kilometer of LED strips. Several artists, including Disorient founder Leo Villareal and Fresno Idea Works’ Jacob Joaquin, designed patterns for the panel. Designs included the double helix of DNA, wiggling snakes and abstract patterns. The pyramid could be seen from almost everywhere on the playa, helping people find the camp and making it a popular place to gather.

A Sitara-based BeagleBone Black open-source computer running LEDscape drove each face of the pyramid, slicing the images into individual panels. BeagleBone Black then sent each piece to four Teensy 3.0 USB development boards, which drove eight LED strips on each panel.

A Toughbook ran the pyramidTransmitter code, which rendered the animation frames to 24-bit bitmaps and sent them to the network via USD.