You’ve got your nom noms spread out on the coffee table ready for the big game. Now you slip on your special shirt, ready to feel every tackle, while safely being a couch potato. Sounds fun, right? According to Digital Trends, the Alert Shirt is going to make your sport fantasy come true.

The Alert Shirt connects to your smartphone using Bluetooth, and is filled with tiny motors which attempt to replicate how a football player feels at key moments during a game. Think haptic feedback on a larger scale, and against your body rather than the tip of your finger.

It has been created as a promotional tool for Fox Footy subscribers in Australia, provided they sign-up for 12-months of access to Rupert Murdoch’s dedicated Australian Rules Football channel. Known for being a tough, hard-hitting sport, the thought of being on the receiving end of any punishment handed out in an Aussie Rules match doesn’t sound particularly pleasant. 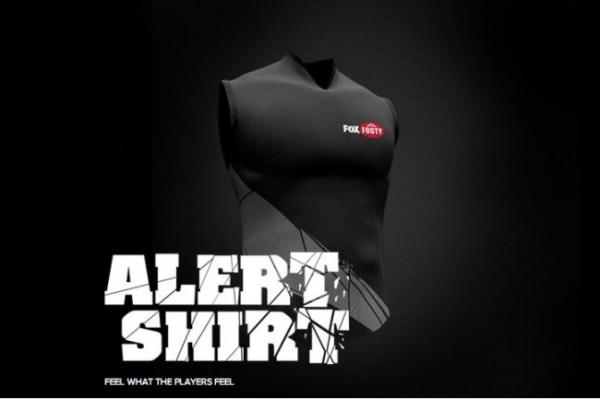 There have been DIY’ers making Arduino scarves and t-shirts that can create a vibration sensation for the wearer, but this technology is more sophisticated because it is using a lot more data. Think of it as creating several event possibilities for the wearer, rather than just one.

It’s not some half-hearted attempt to make the wearer feel closer to the action either. Apparently, data regarding what happens in a match is already being collected. It’s then matched to new impact and sensory data collected during training sessions, sent to Fox’s dedicated app, and finally to the sensors in the shirt during a live game.

The effects aren’t only felt when a player gets tackled, as the shirt also “flutters” to simulate a player’s nerves before an important kick, and amps up to replicate the elation after scoring. It’s all in real-time too. According to a spokesperson, the Alert Shirt is the closest we can get to feeling what a player feels, just by watching the game.

So far this fan sport garment is only going to do you some good in Australia. So, either book your trip or start tackling construction of your own gear. Make your own touchdown hoodie using our FLORA microcontroller and a Vibrating Mini Motor Disc. Then you just have to figure out how you are going to get the touchdown info to your shirt — maybe with a WIFI or BlueTooth shield. Build it and your friends will come.

Comments Off on Feel Football Games with this Shirt #WearableWednesday