Community Corner: This Past Week in the Adafruit Community 3/21/2014 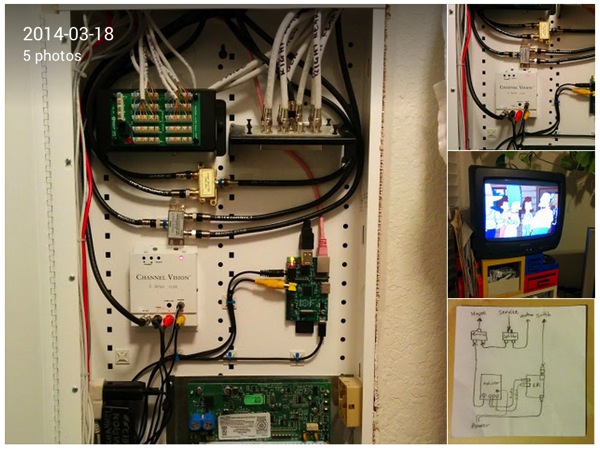 I just wrapped up my first Raspberry Pi project. I’m using one to run my own TV station within the house. A +Plex media server on my network serves out video to an +XBMC distribution running on the +Raspberry Pi where the video is then sent to a modulator and then combined with all the over-the-air channels that we happen to get. The result is that we can tune into a specific channel (set at the modulator) on any TV in the house and watch an endless loop of, in our case, Simpsons and Futurama episodes. You get the sense of it being a normal TV channel, except that it’s only stuff you like and there are no commercials. I’ve been running a desktop to do this for the past 8 years, but finally had the epiphany a week ago to use the Raspberry Pi gathering dust on my shelf to cut the power, heat and noise down to almost nothing.

There are people making amazing things around the world, are you one of them? Join the 77,311 strong! And check out scores of projects they shared this week after the jump! 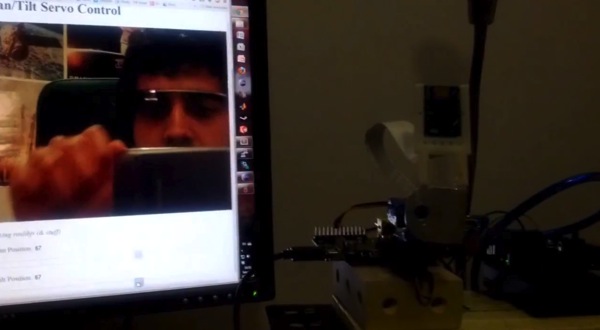 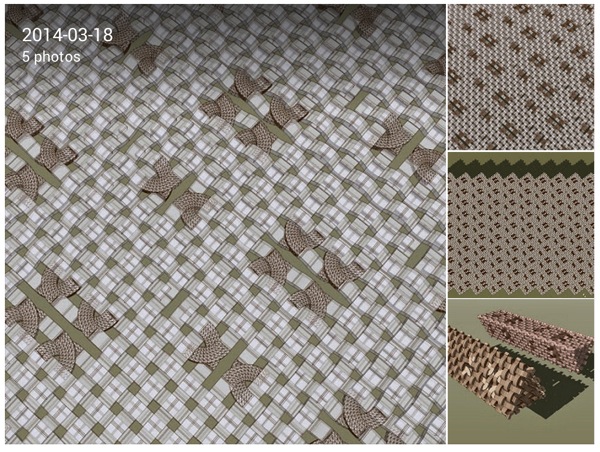 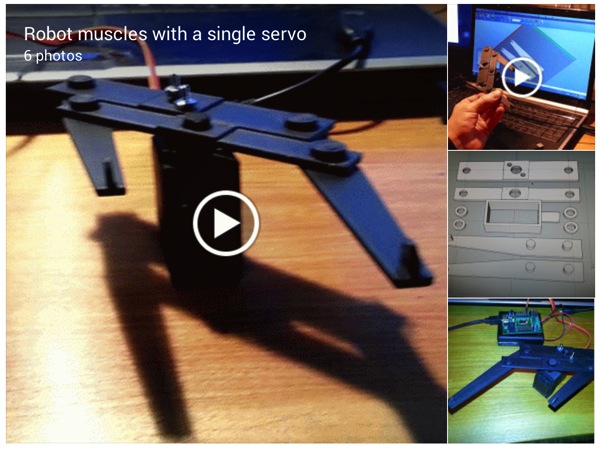 james wolf shared: “I have been thinking about making a simple crawling bot. I needed to come up with a design for part of it that could operate 2 opposing legs with just one servo. I thought this design might work. The setup pivots the black plastic post that is attached to the lower half of the servo with a box. This keeps the two horizontal pieces in line and allows the “feet” to move up and down with just a rotation of the servo. It is strong, friction free, and maximizes the servos strength….” (read more) 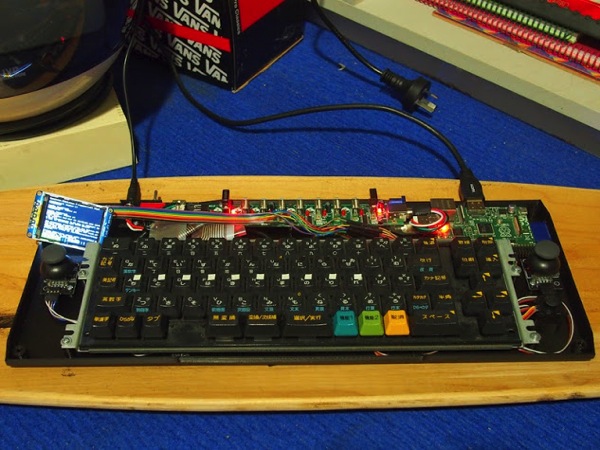 Miles Flavel shared: “The Norseboard is now electronically and functionally complete. All that’s left to do is print the remaining 5 case sections that make up the top half and I’ll be able to call it “version 1″. Since I last showed it, I’ve added the external power port, an external USB type-B connector, and a switch to toggle between use as a standalone keyboard and keyboard for the internal RasPi.” (read more) 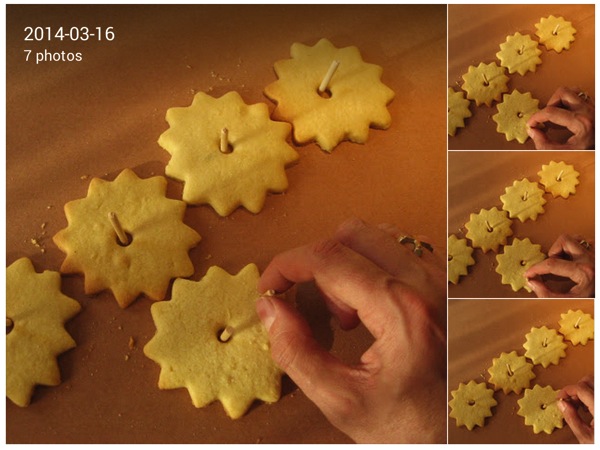 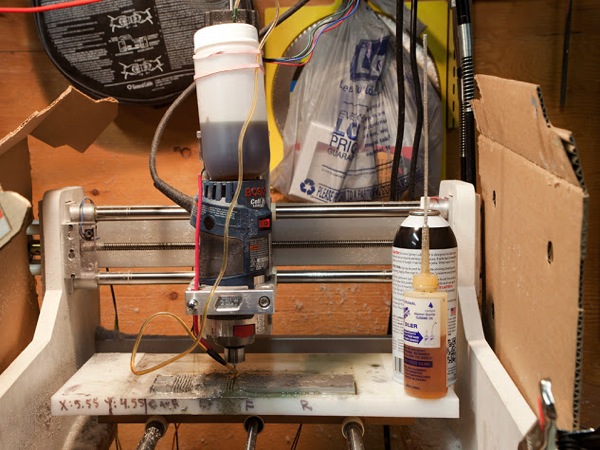 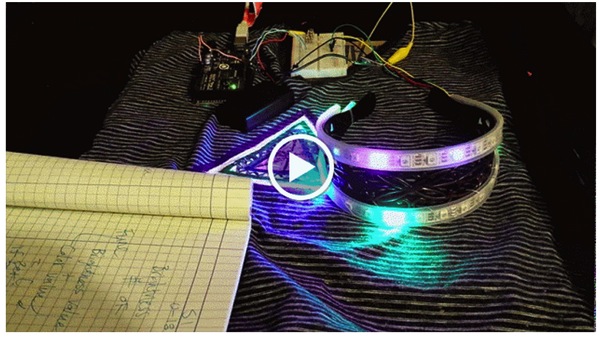 Ryan Farr shared: “Ive been having fun animating dual Adafruit Neopixel strips on a headband with the Arduino! This is the random color, random led, fade in/out algorithm I wrote. Give me some other Animation suggestions to work on! :)﻿” (read more) 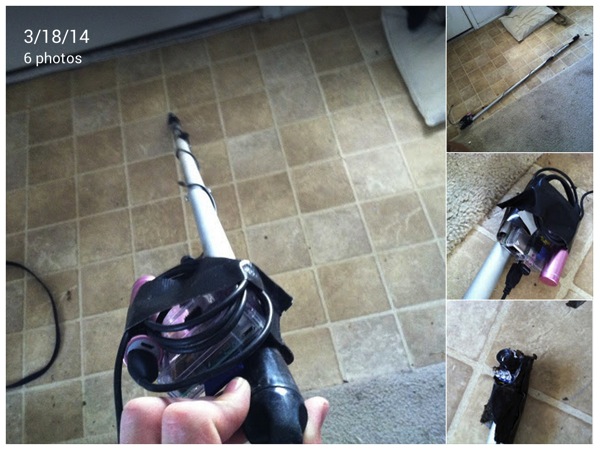 Richard Freeman shared: “My sister had a leak beside the foundation of her house for several years, and we finally fixed it the other day. When we dug it up to fix it finally, we found what seemed to be a large cavity under the foundation. I was worried that the leak (which was really bad for a really long time. I’m astounded that she didn’t realize there was a leak sooner.) was causing a sinkhole. This was my solution to investigate the hole further. I ran the pi headless & I used Motion as a webcam server. The webcam cost $0.02 off of eBay, and had free shipping. 🙂 and it has the LEDs on it with adjustable brightness. I took it out of its casing.” (read more) 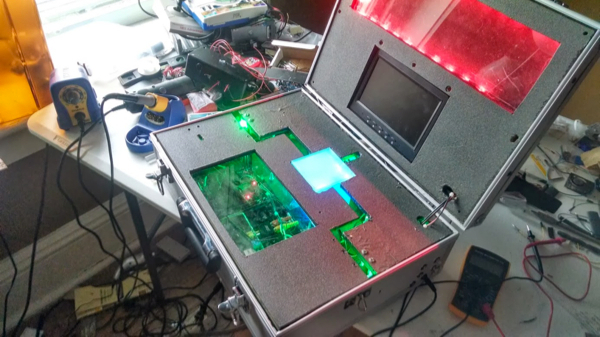 Dustin Evans shared his Homemade Tesseract Case in the Adafruit Forums: “Inside is an Arduino with a spectrum shield and BlueSmirf Bluetooth Modem from SparkFun, a Raspberry Pi, 7″ LCD Monitor, two speakers, a digital amp,, a WiFi Card, and 2 strips of NeoPixels I got from Adafruit. The case I got from Harbor Freight. The monitor has two video inputs. The Raspberry Pi has an RCA splitter that connects to the monitor and a video out on the side of the case. The second video input is wired to an RCA coupler on the side of the case. The audio is connected the same way. This means I can have audio or video connected to the case or brought out to a different system. In my living room, I had it connected to my projector. I’m running Raspbian on the Pi with a stand-alone version of XBMC. I followed this guide to make the Pi broadcast its own wireless network. That setup along with AllCast allows me to send movies on my Nexus 7 to the Pi without me having to touch a thing. This is great because I conduct electricity like a member of the X-Men and actually broke one of my LEDs when I zapped the case on accident. The Bluesmirf allows me to connect to, and change the LEDs with a custom Android app I wrote.” (read more) 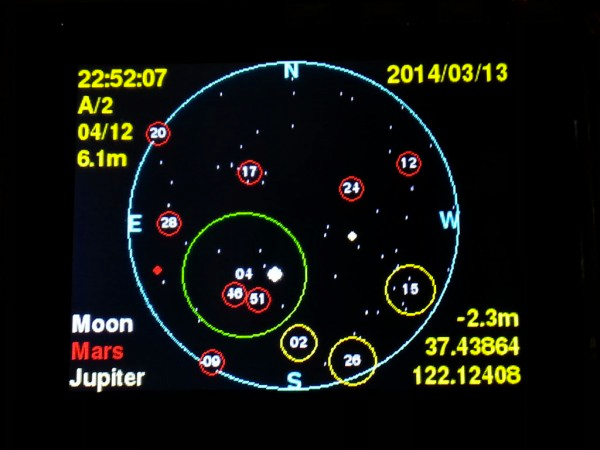 William Phelps shared on the Adafruit Forums: “I’ve written a python program to display GPS satellite data, with some stars and the brighter planets, specifically for the PiTFT display. The GPS parsing is done in a separate thread. The display is unique – it plots circles for each GPS satellite that is overhead, with the size of the circle proportional to the S/N ratio. It even has 10 second position averaging.” (read more)

feynman17 shared a Arduino SVG plotter v.2 project: “…The frame of the plotter was taken from a ye olde Epson printer, reusing the two stepper motors to move the paper along its length and width. The pen is attached to the laser head of a junked portable CD player. With this, it’s just three stepper motors that allow the Arduino control system to move the pen across the paper and put a few markings down. The motors on the printer are, in the spirit of reuse, still connected to the printer’s driver board, with a few leads going directly from the Arduino to the parallel port interface. The motor in the CD player is another ordeal, with a single H-bridge controlling the lifting of the pen. On the software side of things, a Processing sketch reads an SVG file and generates a list of coordinates along a path. The precision of the coordinates is set as a variable, but from the video of the plotter below, this plotter has at least as much resolution as the tip of the pen….” (read more)

Alex Stranz shared a cool Raspberry Pi piggy bank with coin sorter: “A piggy bank and coin sorter made using a Raspberry Pi, an Arduino, Lego Mindstorms NXT, a coin acceptor, Adafruit’s LCD Plate, and a fingerprint sensor. It counts, sorts, and stores coins. The Arduino is connected to the Raspberry Pi via a USB hub; it communicates with the fingerprint sensor and detects what kind of coin is inserted. A Python script outputs information to the LCD display and stores data in a text file.” (read more)

Harvest Zhang and Bonnie Eisenman shared a musical instrument project on the Adafruit Forums – fancy, easy touch sensing + turning water into an instrument: “Thought you might be interested — my friend Harvest and I implemented this adaptation of Disney’s Touche touch sensing system for Arduino, and used it to turn a mug of water in to a musical instrument. The extra parts cost about $1-2; everything else (Arduino, breadboard, mug) you probably already have lying around. And it was so much fun! We got pretty sensitive and robust gesture sensing working — we could tell how many fingers they had on the outside of the mug, when they touched the water’s surface, etc. So then we used ChucK (a musical programming language) to turn it into an instrument. Full blog post, including github w/ all relevant code and sound files, as well as links to an Instructables here! Theoretically this should work with any conductive surface (e.g. people, plants, large metal objects, etc) but we haven’t tested it on other things yet. Would love to hear from anyone else who wants to try this. We owe a lot to other people who have posted similar things; it’s adapted from Disney’s Touché technology (full credits in the Instructables post/github)…(read more) 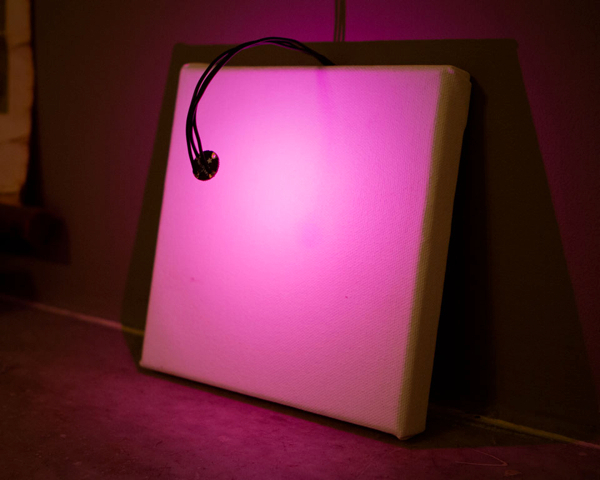 Tim Bartlett shared his Valentines Day Blinky Love Note project! “I made a blinky love note for my sweetheart this Valentine’s Day, because what’s more romantic than Morse code? A single LED paints a 6″ x 6″ canvas with light. It first tells a story through color, and then slowly pulses a secret message in Morse code, fading from deep to light pink. The smart LED is run from a 5v Adafruit Trinket, powered by 4 AA batteries. Download the code here. (This just blinks “hello world.” The secret message will remain secret).” (read more) 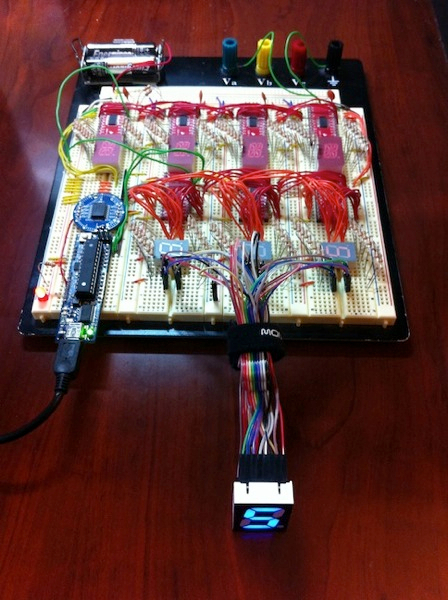 Adam Renie shared this on the Adafruit Forums: “I purchased the A’SYCK AD-121F2 from Adafruit last year and finally posted a little review and demonstration of it in action on my blog. It’s a really fun display, I may just have to purchase 3-5 more to make a more easily readable and colorful clock!” (read more) 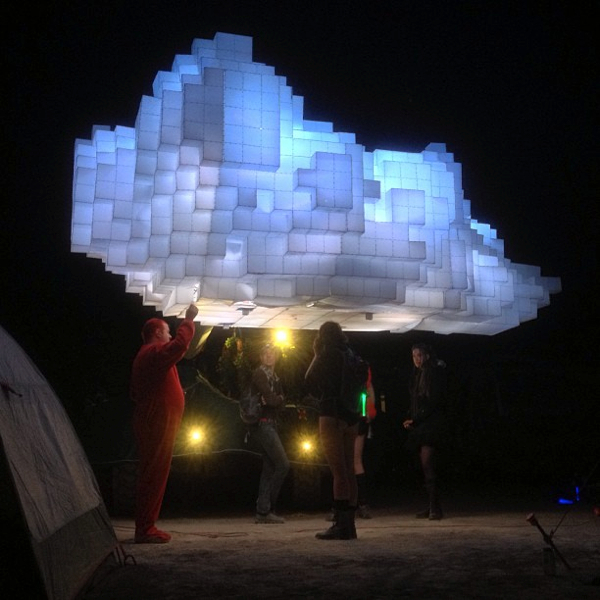 One of CODAME‘s featured artists is Micah Elizabeth Scott, who blends technology with art in surprising and interesting ways: From CODAME: “Micah Elizabeth Scott has been doing unconventional things with technology for her whole life, often exploring the boundaries between hardware and software. She’s built satellites, robots, virtual machines, graphics drivers, CPU emulators, networking stacks, USB controllers, reverse engineering tools, and pretty much everything in between. Recently she’s been exploring the interactions between technology and art, with projects like Zen Photon Garden and the Ardent Mobile Cloud Platform. Her current work explores light, perception, and human interconnectedness. Her interests include interactive sculpture, control loops, emergent behavior, unconventional human interfaces, and using technology to help illuminate what makes us human.” (read more) 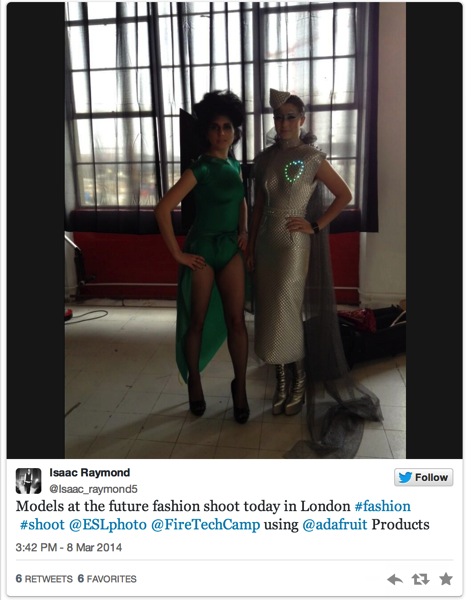 Comments Off on Community Corner: This Past Week in the Adafruit Community 3/21/2014