This is one of the coolest Raspberry Pi photo projects we’ve seen- setting up a ring of raspberry pis to re-create the Bullet Time Effect that was used in The Matrix. Via PiFace.

…It started over 13 years ago watching when I saw the film The Matrix and a BBC documentary called Supernatural: The Unseen Powers of Animals. What linked the two programs was a camera effect where time would stop and the camera would move round the scene. I spent days trying to work out how the effect worked – I accepted that The Matrix used computer generated graphics, but surely the animals in a BBC natural history unit documentary had to be real? My faith in wildlife documentaries was reassured when I discovered a few years later how the effect was created.

The effect was called Bullet time, or Time-slice and consists of taking pictures from a long line of cameras at the same time, but playing them back one after another. Because all the frames are taken at exactly the same time, the action is frozen, but when the frames from cameras, each with a different view, are shown in order, it gives the effect of moving around a scene while time is frozen. On paper it seemed quite simple, to create a bullet time effect, you just needed a lot of cameras that would trigger in perfect sync. The camera rigs for TV and film are as impressive as the budgets, with tens of digital SLR cameras triggered by a slave cable. I could barely afford one DSLR camera, never mind twenty odd. Nor could I afford the tripods to mount them on! I thought my dreams of creating my own bullet time effect were simply unaffordable. That is, until I had an idea back in June this year.

I’d been working on a PiFace interface so I could use my Raspberry Pi without a keyboard and monitor. For a bit of fun I wondered if I could turn it into a simple digital camera, that would take a picture when a button was pressed, and to my pleasant surprise, discovered you could. An idea was beginning to form in my head. If I wrote a bit more code, instead of pressing a button to take a picture, I could trigger it remotely over a network. Furthermore, it cost a lot less than any other digital camera. Could the Raspberry Pi really recreate a bullet time style effect?

I have various crazy ideas, but normally they subside after a few days, but this one wouldn’t. I decided to buy four Raspberry Pi cameras to see if I could trigger them all at once. I laser cut a frame to mount them and it appeared to work, but with four cameras I couldn’t really tell how good the effect was. I decided to buy another four cameras, with the justification that if it didn’t work I’d either sell the cameras or use them in workshops I did with young people. Eight cameras showed promise but nothing conclusive, there was only one way to find out.

It’s a funny feeling carrying nearly 50 computers in a box barely big enough to hold a laptop. In contrast, after multiplying the original mounting frame by 12, I’d ended up with a 3m wide circle. This was when I first realised I was building something significant. After much plugging, wiring, mounting, and SD card package installing the rig was finally ready. It certainly looked impressive, particularly given it was wider than the office. As such, the first time we tried the full rig was the Manchester Raspberry Jam. 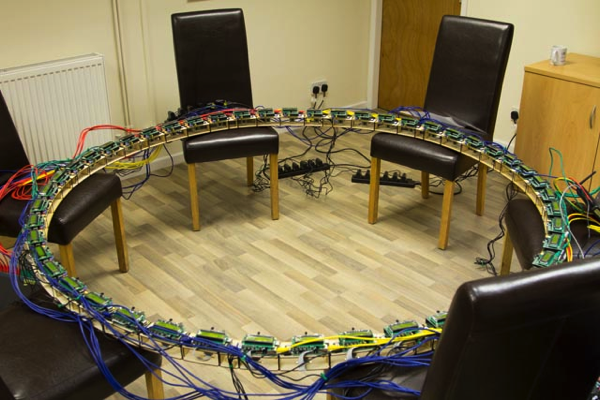