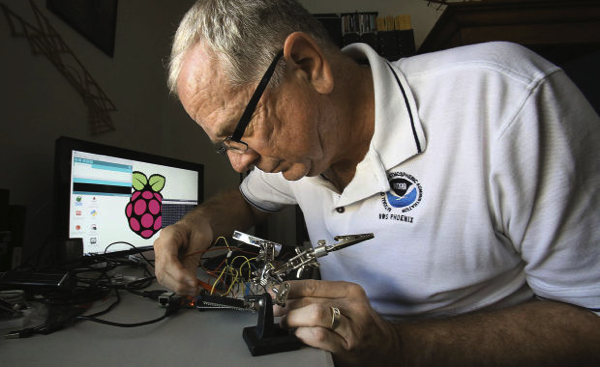 CASA GRANDE — A small, relatively inexpensive device a meteorologist built at his Mesa home in his spare time might lead to a warning system to help drivers avoid dangerous dust storms that sweep across Interstate 10 between Tucson and Phoenix.

Ken Waters’ device, powered by a credit-card-sized, single-board computer, could detect and alert authorities to the storms that often appear without warning.

His proposal energized the room full of engineers, scientists and various bureaucrats in Casa Grande Wednesday. They were attending an annual dust storm task force meeting.

Nate Allen, a scientist at Biosphere 2, provided a low-tech approach to curbing dust storms during his 15- minute presentation. He wants to terraform large patches of desolate land in Pinal County that have long been abandoned by farmers.

While it may sound unusual, Allen wants to temporarily bring in herds of cattle to transform the largely denuded tracts of property.

Small-scale tests in other parts of Arizona found that the cattle kicked up dirt and provided vast amounts of natural fertilizer on the almost alien-looking landscapes.

Months later, grass and shrubs began to grow, he said, illustrating with a before and after slide show.

State agencies have largely struggled with finding a comprehensive solution to mitigating the blinding dust storms that killed 42 people along state highways between 2000 and 2012.

A 10-mile stretch of Interstate 10 near Picacho Peak, an Arizona Daily Star investigation last year showed, is the deadliest in the entire state.

A myriad of overlapping government agencies with limited budgets and constrained regulatory powers have only added to the problem of developing a comprehensive plan to making the trip from Tucson to Phoenix safer on windy days.

The best asset the state has to warn drivers about the hard-to-predict storms are Arizona Department of Public Safety officers out on patrol. Their phone calls to the National Weather Service let officials know about the dangerous weather.

“I’ve been here six years, and it quickly became apparent to me that this may be the biggest meteorological problem we have here in Arizona,” said Waters, who works for the weather service.

A self-described geek, Waters had been toying with low-cost, open-solution electronic devices — most notably Ardunio and Raspberry Pi — when he envisioned a possible solution.

He saw those devices — when paired with air-quality sensors — could be a far cheaper way to warn about potential problem storms than trying to map the wind, visibility and weather patterns in the area.

“What better way to detect a dust storm than with an air-quality sensor?” the meteorologist explained. “ ’Cause as soon as that first front of dust comes through, you can immediately tell what is going on. It is very dramatic.”

He envisions a network of these devices scattered around high-risk areas, updating new information every 30 seconds to various government agencies.

Paired with an existing system, state officials could warn drivers of nearby blinding storms through text messages to their smartphones. 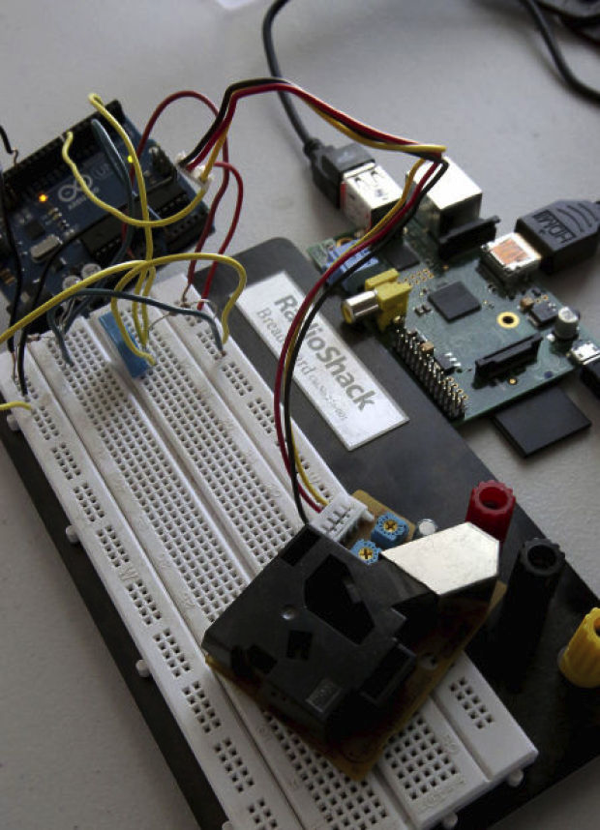 The state continues to advise drivers to pull off the highway when they see massive dust storms.

As designed, the devices designed by Waters lend themselves for use near homes or businesses.

“This low-cost solution works well if you’ve got a house or maybe a building, any kind of already-existing structure,” he said.

However, when paired with solar panels and low-power transmitters, the boxes could be placed virtually anywhere.

“There are examples where people have hooked up with inexpensive solar panels,” he said.

A small-scale test of Waters’ devices is planned, but details about when and where that will occur have yet to be decided.