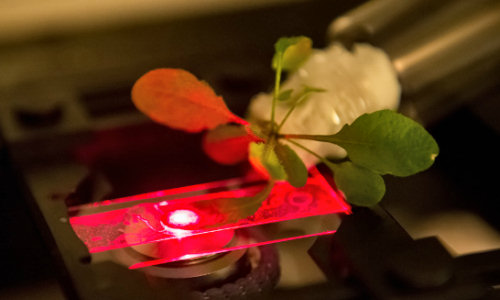 While it’s widely understood that plants produce oxygen through photosynthesis, many people might not realize how inefficient this process itself actually is. Plants are not only limited in the spectrum of light they can absorb (green light is only reflected and not absorbed, giving them the color we perceive them to have), but only about 10% of the light they do absorb is actually capable of being used. Recently, a team of chemical engineers and biochemists addressed this by giving a few plants a boost. By embedding carbon nanotubes capable of absorbing sunlight and converting it into electron flow, they were able to dramatically enhance the photosynthesis rates by up to three times that of untreated plants. The researchers see possible applications ranging from solar energy harnessing to detection of airborne pollutants and more. From Scientific American:

“Plants have, for a long time, provided us with valuable products like food, biofuels, construction materials and the oxygen we breathe,” notes plant biologist turned chemical engineer Juan Pablo Giraldo, a postdoctoral fellow in the research lab at the Massachusetts Institute of Technology who did the work. “We envisioned them as new hybrid biomaterials for solar energy harnessing, self-repairing materials [and] chemical detectors of pollutants, pesticides, [and] fungal and bacterial infections.”

First, the researchers removed the chloroplasts from some spinach leaves and put it in a sugary solution. The researchers then introduced the carbon nanotubes, which embedded in the cell’s fatty walls when treated with DNA to take on a negative charge or chitosan (a derivative of the material comprising insect exoskeletons) for a positive charge. This penetration happens within seconds and doesn’t require heat, a catalyst or anything else, according to the researchers. The move also appears to be irreversible and complete. No nanotubes remained floating outside the chloroplasts in these experiments.

Even better, the trick also works on chloroplasts in living plants. Introduced carbon nanotubes found the chloroplasts in the leaves of an Arabidopsis thaliana, a small flowering plant often used in such studies. Perhaps more important, it did not kill the leaves or the plant over a period of several weeks.