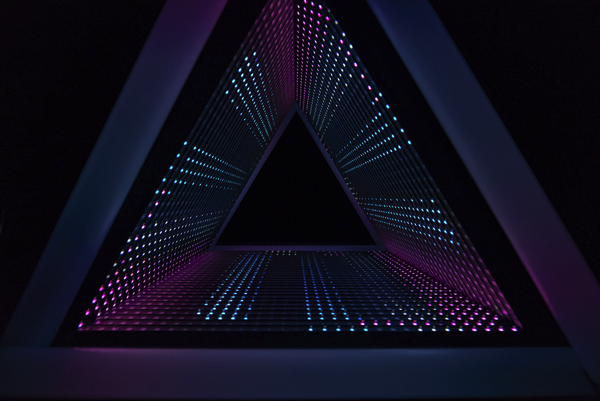 Check out this sweet LED installation from gmunk, inspired by the film Enter the Void.

The main inspiration for the creative came from the DMT-Delicious moments in the super-favorite film Enter the Void… Munko has been on a tunnel infinite-void kick for some years now and wanted to build a practical, LED installation driven by graphic sequencing, utilizing the techniques learned from the FOTB Titles and applying them into a more densely packed setup called the PYRADICAL… Once the Pyrad was constructed, the aim was to capture the visuals with both high-resolution Film and Still cameras, which would generate a vast library of content to pull from to produce the artwork for the Conference Package..

He tapped super-friend and lighting genius Michael Fullman to help him execute the concept, which was to construct a triangular volume out of three LED panels, flanked on either end by a trio of Light Tubes that would complete the design. Once Munk and and Michael had the concept and build nailed down, he tapped frequent collaborators Kevin Gosselin and John Nguyen to capture the installation on the Arri Alexa and Nikon D800.

In building the actual structure for the Pyrad there were some pretty unique challenges to attain the desired aesthetic. We needed to not only communicate forward and backward motion but also communicate negative space and scale.

The structure itself is made up of two main elements. The LED Panels and the LED tubes. 3 LED panels were used to make up the walls, all controlled by video content from a control computer. This allowed us to have open ended control over the motion, color, and effects that were applied to the video content. In addition to the 3 LED panels, 6 LED tubes were used to border the structure at both the front and the back opening. These tubes were also controlled by a mapped video signal that corresponded with the content playing on the main panels. That way we could accomplish moments of punch and exclamation as the content traveled both toward and away from the camera. They also provided a really nice frame for the shot, showing us the beginning of the space and the end.

The real challenge was to trick the viewer into not realizing the scale of the actual structure. Which is really about the camera position, lensing, and light control in the structure, using both the presence and absence of light.

Comments Off on PYRAD: LED “Infinity” panels inspired by Enter the Void #ArtTuesday