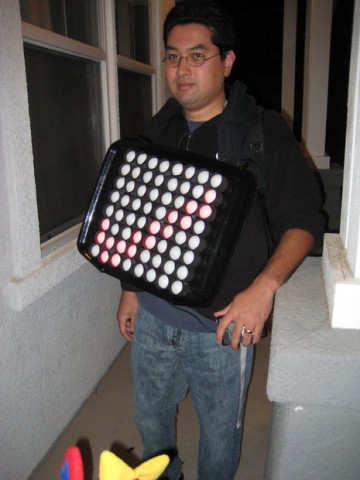 If you’ve been to a Disney theme park over the last few decades, you probably know of the Main Street Electrical Parade. It’s filled with dazzling lights, floats, and infectious music. Instructables user brokenpipe decided to create a one man version of the parade in a costume, and he hacked it together in just three weeks. He used an Arduino Microcontroller, LEDs, ping pong balls, and more and then programmed away. Here’s how he began preparing the base for the LED matrix:

In Illustrator, I made a template to mark out all of the holes that I’ll need to drill to mount each ball [ping pong ball]. The balls I ordered were 38mm in diameter. Apparently, in 2000 it was decided that the “official” size of a ping pong ball would increase from 38mm to 40mm. It doesn’t matter whick size you choose, as long as you know what you’ve got. In my template, I added an extra 2mm between each ball just to allow some room for error when mounting the balls.

I needed a firm base which would be large enough for the matrix so I went a local Target to see what I could find. I ended up getting a black plastic drain board. As you can see from the image, the size worked pretty well.

See it in action: