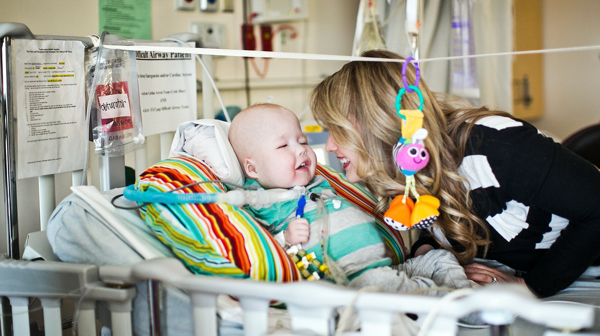 Doctors Use 3D Printing To Help A Baby Breathe:

Ever since the day Garrett Peterson was born, his parents have had to watch him suddenly just stop breathing.

“He could go from being totally fine to turning blue sometimes — not even kidding — in 30 seconds,” says Garrett’s mother, Natalie Peterson, 25, of Layton, Utah. “It was so fast. It was really scary.”

Garrett was born with a defective windpipe. His condition, known as tracheomalacia, left his trachea so weak the littlest thing makes it collapse, cutting off his ability to breathe.

…So the Petersons contacted Dr. Glenn Green at the University of Michigan, who specializes in conditions like Garrett’s. He teamed up with Scott Hollister, a biomedical engineer who runs the university’s 3-D Printing Lab, to create a remarkable solution to Garrett’s problem — a device that will hold open Garrett’s windpipe until it’s strong enough to work on its own.

…3-D printers have been used to build jewelry, art and even guns. But Hollister is using the technology to create medical devices. He uses a 3-D printer that melts particles of plastic dust with a laser. He has already built a jawbone for a patient in Italy and has helped another baby with a condition similar to Garrett’s. But Garrett is a lot of sicker and his condition is a lot more complicated.

“It’s just been issue after issue with breathing, and just trying to keep him breathing at all,” Jake Peterson, Garrett’s dad, says.

At 16 months old, Garrett had never been able to leave the hospital. Every time he stopped breathing, it was a mad rush to save him. And the doctors weren’t sure how much longer they could keep him alive.

“In some sense we were thrown directly into the fire,” Hollister says. “We characterized it as sort of a Hail Mary pass.” …