Community Corner: This Past Week in Adafruit’S Community – March 28, 2014 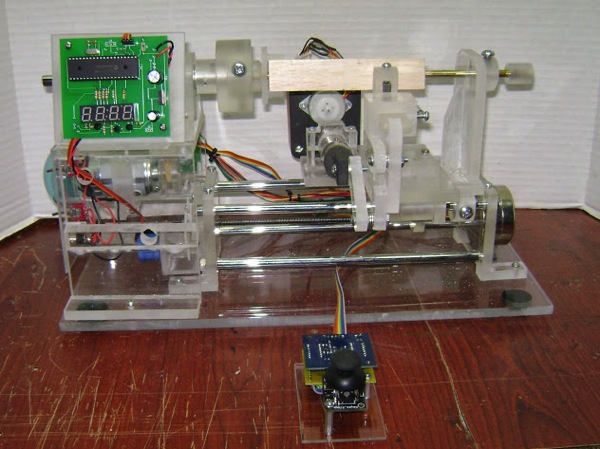 My latest version of the CNC lathe for wood and plastics. This model uses the Ps2 joystick teach system I have been making and allows you to manually create a part and then make copies of that part as the data for the movements are stored as you create the part. The board with the display on the left is the DRO which indicate position of the X and Y, you push the joystick down to toggle between them. A hex file is created as you create the original, and is transferred to a PIC. I have made several more versions of this and am currently making a small mill, drill and foam cutter that will use the same system. The entire machine is mostly made of Lexan bits and pieces and a few inexpensive motors.

There are people making amazing things around the world, are you one of them? Join the 77,795 strong! And check out scores of projects they shared this week after the jump!

Michael “Skimbal” Curry shared about his 3D printed vehicle project in progress: “An update on the development of the suspension and drivetrain, also get a look at what is hopefully the final version of the rear axle.” (read more) 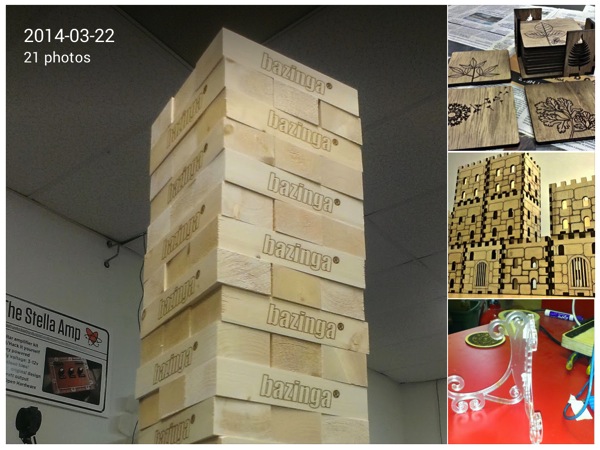 Riley Harrison shared: “I put together an album of projects i’ve been working on since we got our awesome laser cutter at Twin Cities Maker – the Hack Factory. The laser is by far my favorite toy in the shop.﻿” (read more)

Luis G III. shared: “Hi! Today I finished HelloSpoon robot, now it actually looks like a robot is everything mounted and running.
Here’s a little video showing you how HelloSpoon robot is and how it looks. Hope you like it and if you like the video please share it! That will be very helpful :-)﻿”(read more) 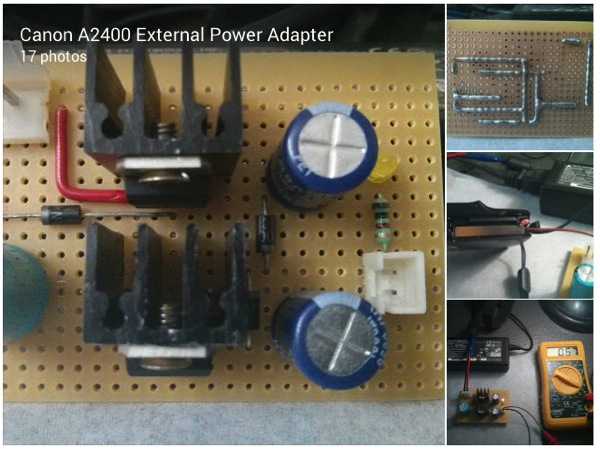 Bongo Lee shared: “Got a Canon A2400 power shot a month ago. Got the CHDK firmware working on it very happy with the results. If you haven’t heard about CHDK it’s really worth looking at. It enables you to access the raw power of the camera. You can get the functionalities you would usually find on a DSLR camera on to a cheap point n shoot camera. The camera’s battery is puny and had only enough juicy for maybe an hour. Not enough if you want to take time lapse shots. So saw a few hacks where you can replace the battery with a dummy one and connect it to a external power source. The same product is available from canon for a price of 70$!!! That’s inane given that the camera itself costs just about 100$ So gave it a shot with what I had lying around at my home and this is what I came up with.” (read more) 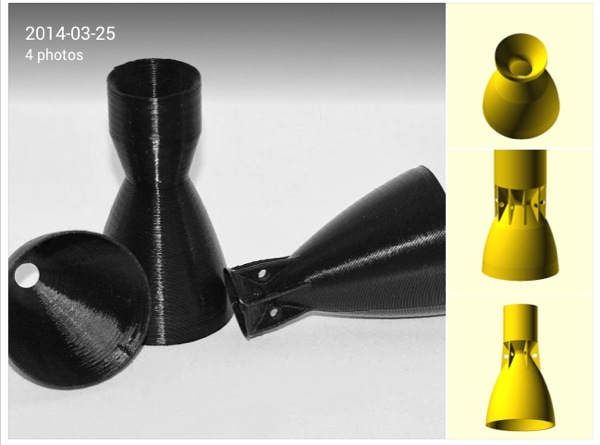 Kevin McIntyre shared: “I’ve been designing a parametric 3d printed rocket nozzle in openSCAD, mainly as a learning experience. I’d eventually like to try casting one out of metal, but in the mean time i’m just playing with the printed ones with pressurized gas. It’s up on github if you want to contribute.” (read more) 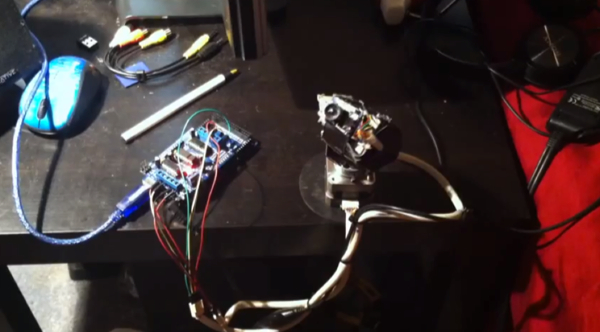 Richard Freeman shared: “DIY 360 degree pan/tilt camera system. Using adafruit’s accelstepper library. Going to use the raspberry pi to connect a wiimote to this some time this weekend. It has a simple elegance to it… That grace though. Love seeing it dance, and the sounds of these stepper motors is addictive. I have five of them that I salvaged from a broken DJ lighting effects rig.﻿” (read more) 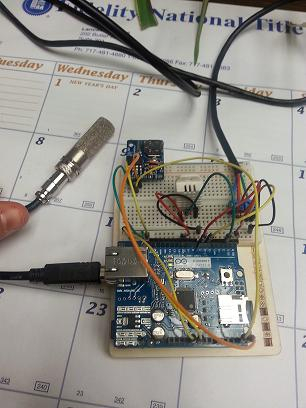 uflnuceng shared a nice writeup on results of soil moisture testing on the Forums: “Ok, using the code above, I setup a DHT22 and an SHT10 as you can see in the image below. The DHT22 was used to give me ambient air temp and relative humidity, while the SHT10 was placed in different media to determine 1) its speed of change, 2) reliability of data reported, 3) consistency of results….” (read more) 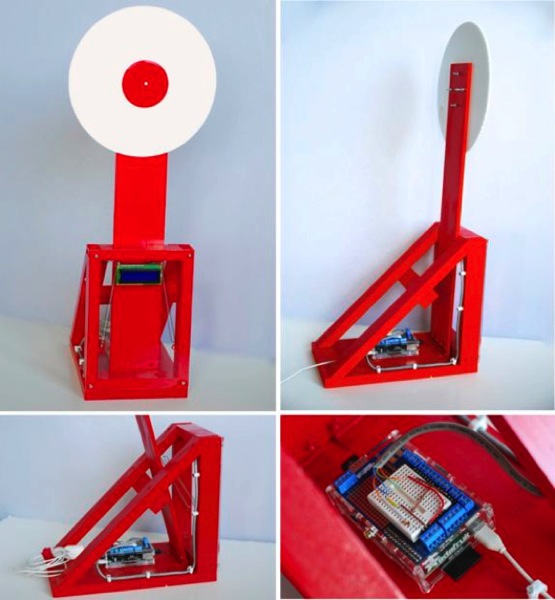 noelportugal shared a Raspberry Pi Smart Target project: “The Raspberry Pi Smart Target was designed to be hit by the now famous Flying Monkey, but It can be hit by any other light object such as small ball. When the Target is hit the following events happen:
A random sound effect is played through a small set of speakers connected to the Raspberry Pi. A “congratulations” message is displayed in the front LCD screen. The Raspberry Pi grabs a snapshot from a network camera (Dropcam) and is posted to a social network. A random message is posted along with the picture taken by the Dropcam.
The whole action is immortalized in the interwebz….” (read more) 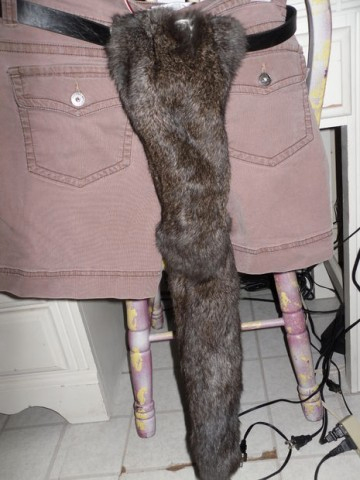 Instructables user Umberfur shared an Arduino Uno controlled animatronic wolf tail: “Take your Klixx toys and pull apart all the little pieces. I like to keep my colors separated, so once you have done that, take a closer look at the inside of one of the pieces. You see the two little knubs sticking out a bit from the inside walls? Those have got to go so grab that Exacto Knife and carefully cut off those little knubs (Please if you are a wolf cub allow your parents to do this for you). After you cut off all those knubs place two pieces together and move them back and forth. Hear anything? No? Great! Now then, turn them over so that the single flat end faces you. Clamp them down tightly and drill a hole all the way through. Take the drilled out piece and place it on top of the dual end of another component. Mark where the hole is and drill through both ends. Repeat this for all the pieces you plan on using for your tail.” (read more)

Artist and maker Dmitry Morozov sent us a blog tip about his latest project: a sound controller that uses a tattoo as a music score. It’s one of the coolest DIY Instruments we’ve seen: “This is a special instrument that combines human body and robotic system into a single entity that is designed to automate creative process in an attempt to represent the artist and his instrument as a creative hybrid. The device consists of a railing with comfortable hand holders and two parallel, but offset from each other black lines’ sensors that move along the arm using a stepper motor. It is equipped with a 3-dimensional Wii remote controller that uses the OSC protocol in order to give a possibility of additional expression achieved by moving hand in space.” (read more)

Eduardo Zola shared a video and tutorial details for creating A Tetris Rig with a Pair of Adafruit NeoPixel Matrices: “Since I started with arduino, i always wanted to make a game based on this platform. So one day I thought, why not create an old classic Tetris ? I remember to play it a lot in old times, mainly in windows 3.1 and 95 ages. So, the first thing i needed to start the project, was to find out a RGB display, push buttons or a small joystick, and an enclosure to attach everything. After some research, I found out the Adafruit Neopixel Matrix 8×8, which is very easy to apply because it uses a just a single wire interface and simple handy library. So, I used two matrix of this, which gave me a display of 16 rows and 8 columns of RGB LED (or pixels). For powering, I used a Lithium Ion Battery of 3.7V 4400mAh. It was really necessary to put a capacitor (1000 µF, 6.3V or higher) across the positive and negative terminals of neopixel matrix….” (read more) 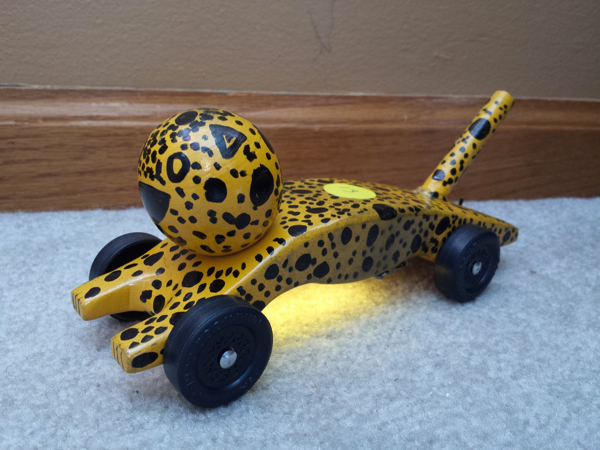 eagleeye2e shared a how-to for bringing some Adafruit interactive bling to his son’s Pinewood Derby car on the Adafruit Forums: “We decided to add a little high-tech flash to my son’s Pinewood Derby car this year. This project involved several Adafruit products including a 3.3v Trinket, a NeoPixel stick, a FLORA Accelerometer/Compass Sensor, and a Lithium Ion Polymer Battery. All of these components were chosen for their size and their light weight. The idea was to have a subtle yellow glowing effect under the car while it was at rest and while the car was in motion going down the track the pixels scroll from front to back with a brighter, different, color. The faster the car goes, the faster the pixels scroll. In addition, every time the car goes from scroll to rest, the color of the scrolling pixels changes to a new color for the next race. The car received many complements and oooh’s and ahhh’s. Thank you Adafruit for all of the great products that allowed us to add something fun and unique to our Pinewood Derby experience!” (read more)

Instructables user brokenpipe created a one man version of the parade in a costume: “In Illustrator, I made a template to mark out all of the holes that I’ll need to drill to mount each ball [ping pong ball]. The balls I ordered were 38mm in diameter. Apparently, in 2000 it was decided that the “official” size of a ping pong ball would increase from 38mm to 40mm. It doesn’t matter whick size you choose, as long as you know what you’ve got. In my template, I added an extra 2mm between each ball just to allow some room for error when mounting the balls. I needed a firm base which would be large enough for the matrix so I went a local Target to see what I could find. I ended up getting a black plastic drain board. As you can see from the image, the size worked pretty well.” (read more)

Comments Off on Community Corner: This Past Week in Adafruit’S Community – March 28, 2014