Does the band rock? Find out with the Rockterscale #ArduinoD14

The folks over at Radio 1 Interactive built a device powered by Arduino boards called the Rockterscale that can measure how much a band rocks.

An idea popped out of Radio 1 Interactive a while ago. This would be a device that measures ‘rock’ – how much the band and the crowd are rocking at a gig – called The Rockterscale. It would display the amount of rock at the venue and on the web in real-time, maybe even showing it at other gigs and encouraging bands and crowds to out-rock each other. But, until now, no-one has really tried building it. But we were due another hardware hacking session so we decided to build the Rockterscale. Two intensive days later we had these…

First, we have the Hat of Rock which measures the amount of head thrashing. Suitable for both fans and the band.

Next, the dance floor measures movement and a force sensor hooked up to an improvised crash barrier at the front measures the crowd pushing up to it.

A webcam mounted on the ceiling measures the overall crowd movement and then there’s the music itself. Audio processing code measures the loudness of the song and the spread of the frequencies in it – a high value would be a “wall of sound” like effect. It also does some beat detection. So we have 6 measurements and an equation… 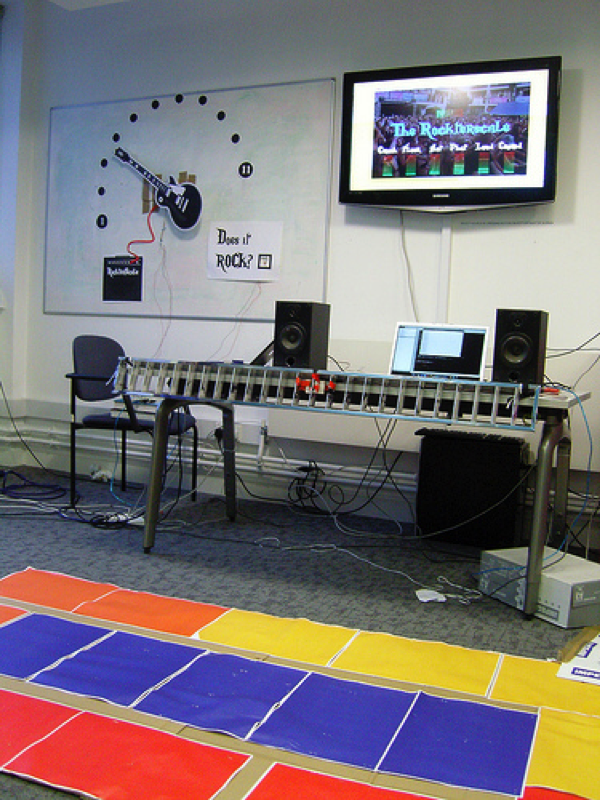 Comments Off on Does the band rock? Find out with the Rockterscale #ArduinoD14