Arduino powered Dalek for all the Dr. Who fans. Designed by Andy Grove.

After building the miniature robot Dalek earlier this year I decided to start work on a full size Dalek with the goal of finishing it in time for Halloween. Well, with just days to spare, I have completed the project. The construction took five months, with some time spent working on it almost every weekend. It is made primarily out of plywood, cardboard, and papier mache.

The electronics were comparatively quick to put together. I have used an Arduino Uno to monitor two ultrasonic sensors in the base of the Dalek and send the results over the USB serial interface to a Raspberry Pi which then plays an MP3 clip. I used a separate Arduino board to provide sound to light functionality to drive the dome lights.

I could have achieved the results I needed using just the Arduino or the Raspberry Pi but it seems to me that the Arduino is better suited to low level functions interacting directly with sensors and motors and so on, whereas the power of the Raspberry Pi is that it is a fully functional Linux computer for tasks requiring more computational power and where I can easily use existing skills to leverage the internet later on. Eventually I plan to put motors in the dome and a webcam in the eye so that the Dalek can look directly at people that approach. I also want to have a web interface to be able to control behavior. 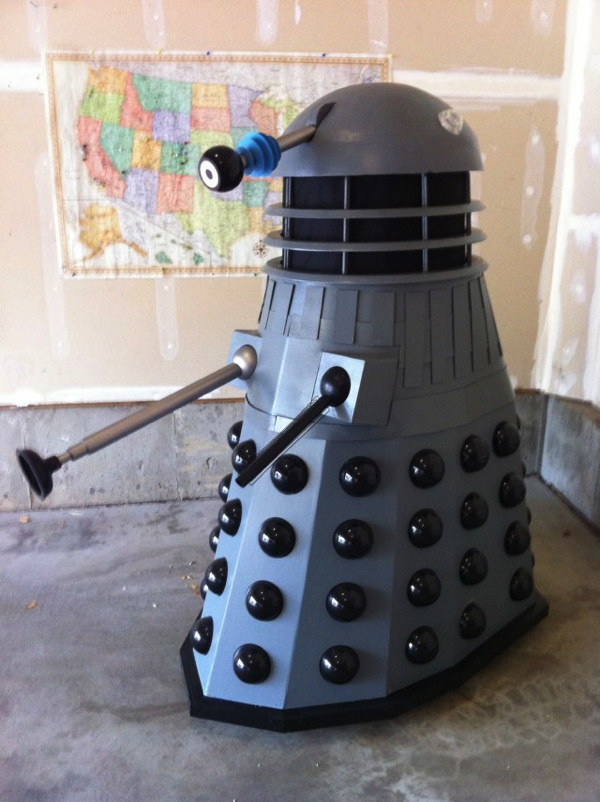