Jackpot! How Hackers Made a Slot Machine That Mixes Drinks #ArduinoD14 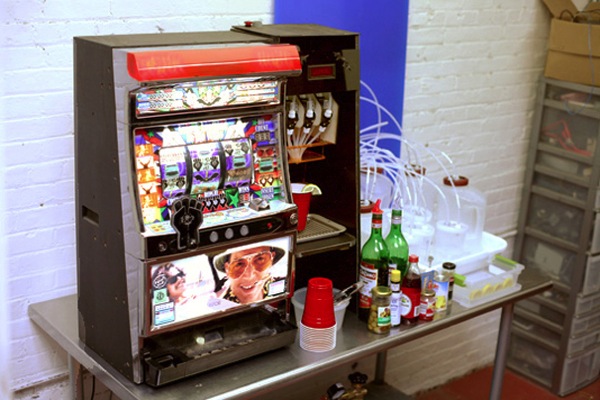 The list of impressive BarBots making use of Arduino-based controllers and monitors is nearly endless. Here’s one that I particularly enjoyed, a Fear and Loathing-based Slot Machine BarBot created by members of NYCResistor back in 2011:

…From poking around the machine’s guts to the actual build-out, though, the idea and approach changed a number of times. They initially planned to assign ingredients to positions on the wheel, but near-undrinkable combinations convinced them to switch to a randomized reward system based on 30 or so preprogrammed cocktails stored in an sqlite database. As Hunter S. Thompson’s favorite drink was Wild Turkey, however, they mapped it to the big win.

Ingredients like vermouth, bitters, sour mix, and garnishes were kept on the side, and Resistor Max Henstell developed an Arduino-based LED screen to instruct players what they needed to add to their payout. This same display also cycles through quotes from the story, like “We can’t stop here! This is bat country!!” and “As your attorney I advise you to to spin.” The video screen behind the sunglasses on the bottom image was also programmed with video clips, but it blew out a day before the project was finished.

For the beverage reservoirs, the team first tried using breast pumps to dispense pours. However, they couldn’t keep liquids and air from flowing back into these containers. Instead, team member Nick Vermeer developed a pressure bed system using 12 solenoid valves and modified food-safe jars from The Container Store.

Controlled by an internal netbook running a python script, the Arduino-controlled solenoids open in a timed sequence and dispense through a shared nozzle designed by Adam Mayer. Though these pressurized containers could have been dangerous, they were able to avoid booze explosions; the containers are secure with up to 30 pounds of pressure.

In the final version, they also added in a “cheat” that lets users request a specific cocktail to come up as the next selection, and gave the machine the ability to tweet the drinks it mixes through @luckyloathing. It took eight hackers three weeks and between thirty and fifty hours each to build this cocktail-slinging device, and their victory party must have been awesome…. 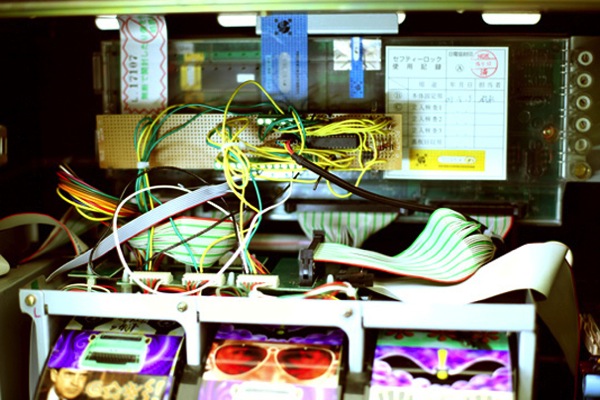 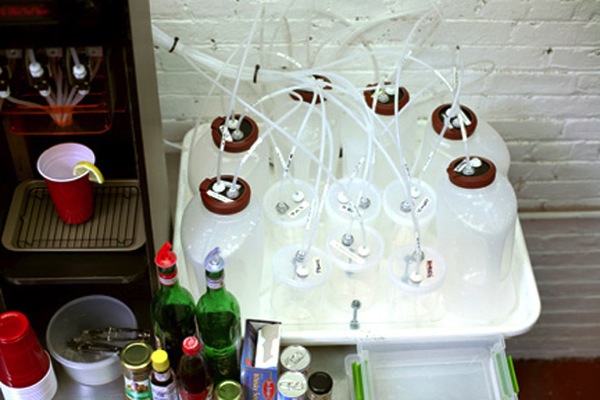 Comments Off on Jackpot! How Hackers Made a Slot Machine That Mixes Drinks #ArduinoD14