With the help of an Adadfruit RFID/NFC Shield, this ATM no longer requires credit cards, from hackaday.

Don’t you hate having to pull out your wallet or cellphone in order to pay for something? What if you could just wave your hand and transfer money that way? Well [David] did, so he decided to do something about it. He made the vending machine in his hackerspace, FamiLAB, cyborg friendly.

The problem was, the vending machine wasn’t technically his to play around with… so he had to do this hack without actually modifying the machine itself — which we admit, actually makes it quite a bit more interesting!

But first, why is [David] even doing this? Is he a cyborg or something? Well, not quite, but he’s quite enthusiastic about bio-tech (is that what we call it now?) — anyway, he has NFC implants in his hand, and magnets in his fingertips to give him a sixth “electro-sense”. Wanting to take the most advantage of these augmented abilities, he put together this clever NFC credit card emulator.

To read his hand, he’s using an Adafruit RFID/NFC Shield stuck on the front of the machine, with an Arduino Mega 2560 to control it. To get around messing with the credit card unit, he’s placed a solenoid next to it, which is close enough that when energized with his information… the credit card machine reads it. Whether or not you like the cyborg action itself, what [David’s] put together is pretty incredible. He has detailed instructions and material on GitHub if you’re interested in knowing more. 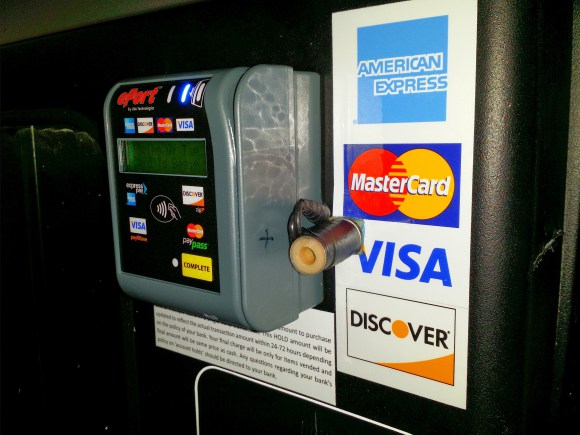 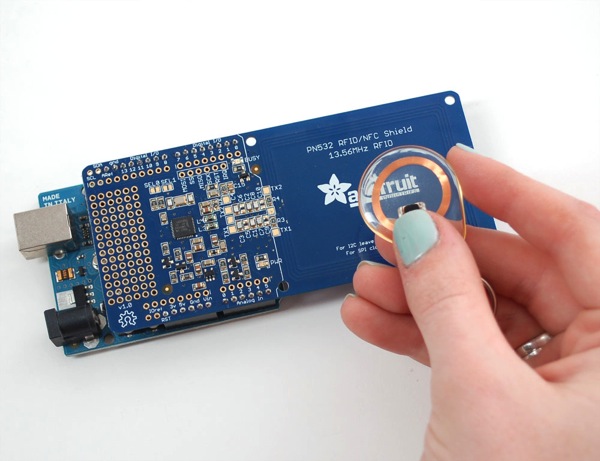 Adafruit PN532 NFC/RFID Controller Shield for Arduino + Extras: We’ve taken our popular Adafruit PN532 breakout board and turned it into a shield – the perfect tool for any 13.56MHz RFID or NFC application. The Adafruit NFC shield uses the PN532 chip-set (the most popular NFC chip on the market) and is what is embedded in pretty much every phone or device that does NFC. This chipset is very powerful, and can pretty much do it all, such as read and write to tags and cards, communicate with phones (say for payment processing), and ‘act’ like a NFC tag. While the controller has many capabilities, our Arduino library currently only supports reading/writing tags, and does not support phone-to-shield communication, tag emulation (which requires an external ‘secure element’ only available from NXP) or other more advanced features at this time. Read more!

Comments Off on This Vending Machine is Now Cyborg Friendly #ArduinoD14