Nick Lamprianidis shared with us his Android app that communicates with an Arduino Web Server to control a NeoPixel LED strip – ArduinoPixel on GitHub:

This project consists of two pieces. The first piece is an Arduino sketch that implements a Web Server and offers an API for controlling a NeoPixel LED Strip. The second piece is an Android app, ArduinoPixel, that connects to the Arduino Web Server and sends commands to control the color and the on/off state of the LED strip.

The Arduino sketch is also available at codebender. You can clone the project, update the controller and network parameters, and upload it straight to your Arduino Ethernet, or any other Arduino compatible board w/ an Ethernet Shield.

The Android application is available on Google Play. Install the app to your phone or tablet, configure the network parameters you set earlier in the Arduino sketch, and you are ready to go. You can watch a demo on YouTube. 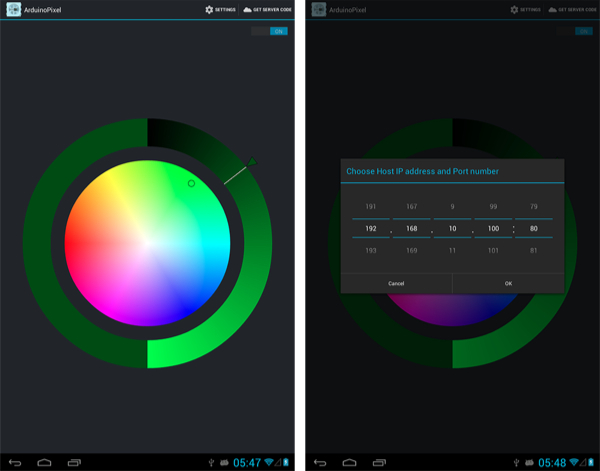 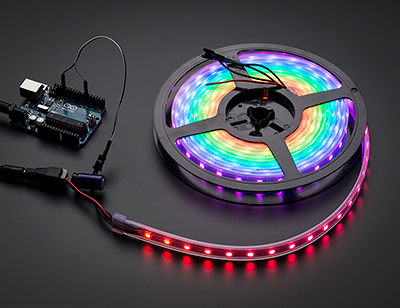 Adafruit NeoPixel Digital RGB LED Weatherproof Strip 60 LED -1m – WHITE: You thought it couldn’t get better than our world-famous 32-LED-per-meter Digital LED strip but we will prove you wrong! You wanted twice the LEDs? We got it (well, its 1.875 times as many but that’s within a margin of error). You wanted thinner strips? Now only 12.5 mm wide, 10 mm if you remove the strip from the casing. You wanted less noticable strip color – this strip has white-colored flex PCB, which will be less visible against white-painted walls. This is the strip with white flex PCB, its identical to the black 60 LED/meter except it has a different color mask on the flex strip (read more)