Dead Computer Tower? Why Not Make a Tool Box? 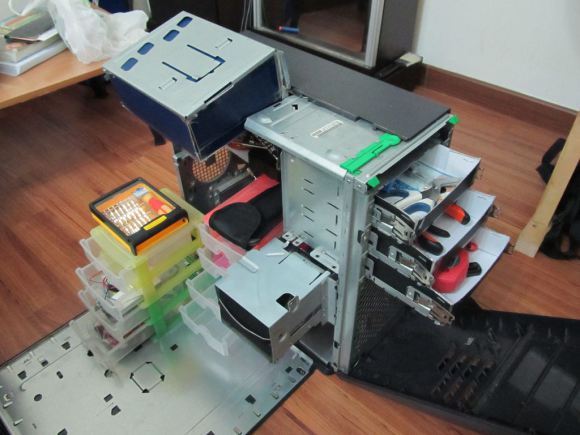 Turns out a dead computer tower is the perfect structure for an oversized tool box, from hackaday.

[Michael Gohjs] acquired a bunch of old business computers — the Dell Optiplex GX400, to be precise — and after salvaging any of the useful components out of them he was left with the cases. Not wanting to toss them for recycling, he decided to try upcycling one into a portable tool box.

The cool thing with using a computer tower for a tool box is most of it is already setup for modular storage spaces. [Michael] removed the bracket that holds the power supply in place, and using some cardboard from a calendar stand formed a box attached to it — instant storage space. Even better? The 5.25″ drive bays have sliding rails for easy removal! Again, all [Michael] had to do was build a box in between the slot rails and he had a cleverly utilized drawer.

The rest of the case was built in a similar manner, making use of pre-existing features, and making new cubbies. If you wanted to get fancy, you could use sheet metal to do this to make an even more rugged toolbox.

Comments Off on Dead Computer Tower? Why Not Make a Tool Box?