I had some AMS2 shields lying around when I needed to drive some stepper motors. I thought you might like the results. (Read more.)

From the MarginallyClever.com project page:

…I’m dedicating the next year to one of my dream projects: Building a 6DOF arm and making it available for everyone.

For the last two years I’ve been teaching myself what I need to know to build a robot arm. I started the Makelangelo to learn how to use stepper motors. I built my first Delta robot to learn how to calculate Inverse Kinematics. I Build the first Stewart Platform because I thought I could use it as a wrist for the robot arm and because I want to drive at least 6 stepper motors in the final arm. It’s like I’ve got the Minecraft blocks and now I can craft them together. The Makelangelo 3 is out, the Seattle Mini Maker Fair is over, and I have more time to work on what really matters to me.

How does it work?

Between the shoulder and the elbow there’s an extra “tendon” bar that pulls on the back of the elbow. See how there’s two gears on the front of the shoulder? One of those gears is attached to the tendon. That way I can put all the motors on the base and make the arm lighter. The second gear is turning the shoulder.

In this first prototype I’m using Two Adafruit Motor Sheild v2 on an Arduino UNO for the brain. For the first test of the software I used the gcodecncdemo for AMS2 with 4 axis. I could type gcode command G00 Z10 and the robot would turn to the left, G00 X10 would move the shoulder, and G00 Y10 would move the elbow…. 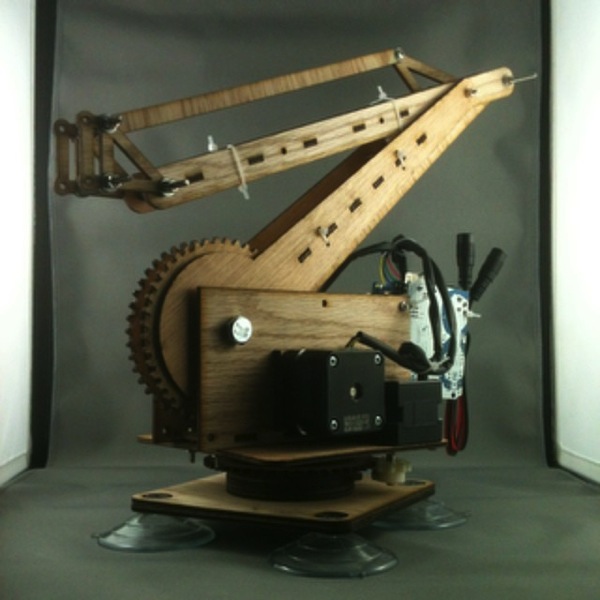 Comments Off on From the Forums: Open Hardware, open source 3DOF robot arm with AMS2