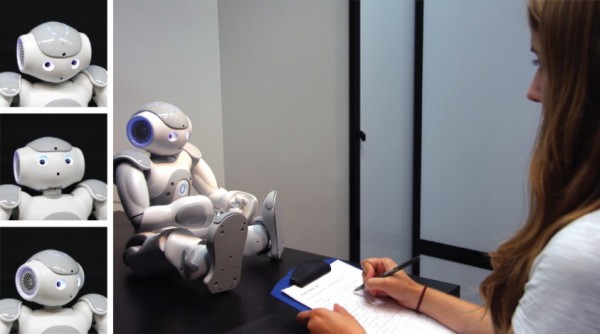 This piece in the Badger Herald highlights new research being done at the University of Wisconsin on how to make robots more like us humans. The main focus is on “gaze aversion,” which teaches robots to turn away and act distracted during conversation. Robots! They’re socially awkward! Just like us! via boingboing.

If interactive robots were able to pause during conversation and take a moment to gaze off into the distance as if pondering what the user was saying, research suggests this small change could make them seem less robotic.

Specifically, Andrist’s research focuses on “gaze aversion,” or the moments when people glance away or look around during conversation.

Andrist has a particular interest in human-computer interaction and computer animation, so he started working on a cross-section of these two topics. He looked at how to make computer agents behave more naturally and work with users more intuitively, his co-advisor, Bilge Mutlu, a professor in the Computer Sciences Department, said.

To achieve a stronger application of gaze mechanisms in communicative characters, Andrist said he also studies social science aspects of how humans behave while communicating with one another.

In his most recent paper, Andrist outlined how speakers use these aversions in conversation, they signal to the listeners that cognitive processing is occurring, creating the impression that deep thought or creativity is being undertaken in formulating their speech.