A toaster re-vamped to DJ your kitchen @Raspberry_Pi #piday #raspberrypi 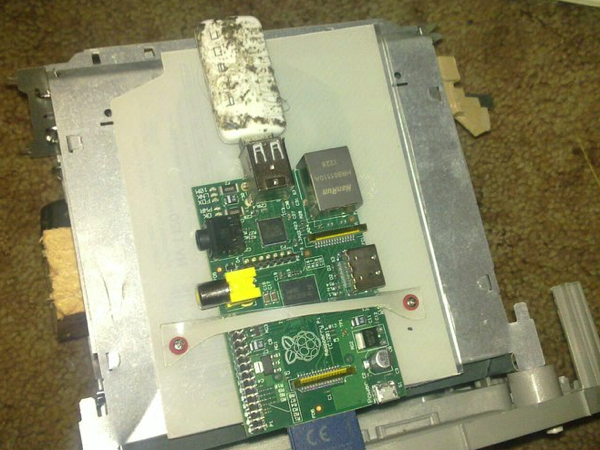 This toaster can’t make you breakfast but it will fill your world with song. Using a Raspberry Pi and a motion sensor, this maker cued his toaster to play music and flash LEDS when someone walks (or dances!) by, from jezra.

Solitude is my muse, and taking things apart keeps me from getting depressed. However, it is still nice to hear other people say nice things so I decided to convert a toaster into an interactive art project that says nice things when something (usually me) walks in front of it.

The first step to any great project seems to begin with a bit of destruction. Good. Nothing really clears my mind like taking something apart. Yea, I laughed when I bought the toaster and I’m still laughing now.

The toaster was soon gutted and a bunch of innards where chucked in the waste bin.

For this build, I planned on using the Raspberry Pi from the NaNoBox and since someone is a hobby hardware hacker hater, there are no mounting holes on my Raspberry Pi. sigh. Who’s a liar? ME (sort of). I said I wouldn’t use the Raspberry Pi for a similar project. Fortunately, this project isn’t too similar.

Circuit from the shell

After a bit of scratching at the circuit board and some soldering, the buttons and LEDs where ready to be wired up.

Circuit back in the shell

Oh man, look at that rat’s nest of wires.

This is the inside of the shell with most of the wiring finished. This includes the PIR thingy. What’s a PIR thingy you might ask? good question.

A notch was cut in the toaster’s lever channel and the PIR was hot glued into place. Damn, I love adhesives.

My buddy gave me a small USB amplifier and speaker combo used for plugging into a mobile phone.

In my haste, I obliterated the amplifier before taking a pictures. What a shame. The wires on the amp were to frail for my needs so I soldered on some heavier wires for audio in, audio out, and the power connector. Since the amp was originally powered over USB I figured I could wire it to the 5v pin on the Raspberry Pi. The speaker is from another portable amplifier… 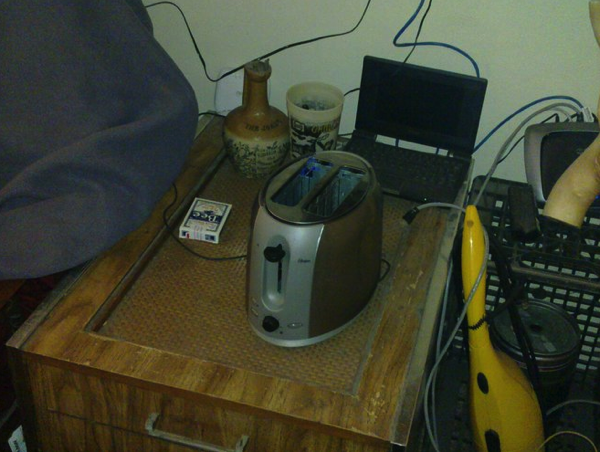