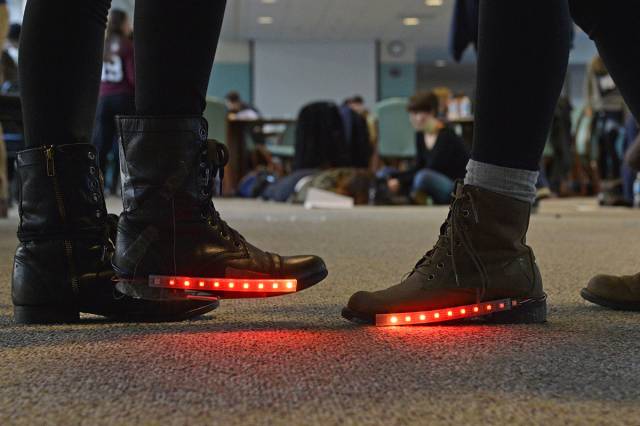 During the second half of the day, Gavin Lund, an electrical engineer in the laboratory’s Optical Communications Technology Group, introduced the girls to computer programming and circuits. As part of an interactive demonstration, the girls created simple instructions to program a robot —i n this case, Railey — to build a peanut butter and jelly sandwich. The exercise prepared the girls to program light-emitting diodes (LEDs) for their final workshop activity: build a shoe-wearable electronic circuit with a FLORA (a wearable electronics platform), LEDs, and a pressure sensor. For this activity, the group used the Firewalker LED Sneakers technology developed by Adafruit Industries, an MIT alumna-founded company that designs open-source electronics kits for do-it-yourself (DIY) projects. Because of the complexity of the Firewalker code used to program the LEDs, Leslie Watkins of the laboratory’s Advanced Capabilities and Systems Group wrote a library of functions that covered the code. For the code to work, the girls had to put these functions in the correct order and select the appropriate weight threshold for the pressure sensor. On hand to help them with their programming and circuitry was a team of computer scientists and engineers.

“Many of the girls were really amazed that their codes worked. Their faces lit up as they walked and saw their shoes flashing red,” says Railey. In reflecting on this part of the workshop, one participant said, “It was satisfying when the shoe lit up. I now want to get into more programming.” In the end, most pairs of girls had built functioning wearable circuits. According to Railey, the few girls who did not get their code to run learned the important lesson that engineering is not always successful on the first try and requires problem solving.

Comments Off on MIT Wearables Workshop for Girls #WearableWednesday