How do you literally outshine 1200 bejeweled party guests at a masquerade ball? By dressing as the latest advancement in technology of course! This is what Alice Gwynne Vanderbilt did in the 1883 masquerade ball hosted by Alva Vanderbilt, an Adafruit forum member informs us. While other attendees dressed as notable figures such as a Venetian Princess, Queen Elizabeth, Daniel Boone, and Father Knickerbocker, Alice Vanderbilt chose to personify electricity as “Electric Light”, winning the prize of most memorable costume of the Gilded Ages and became possibly the first person to done a wearable electric dress.

Like all the costume from Vanderbilt’s masquerade ball, the Electric Light gown was meticulously crafted.

Her stunning gown was made of white satin and trimmed with diamonds. It came with hidden batteries, so Alice could light up like a bulb.

The gown also included a black velvet train, fringing, and other details. It is now in the collection of the Museum of the City of New York. In the late 19th Century, electricity was a new marvel and was at the cusp of changing the way people lived on a massive scale. 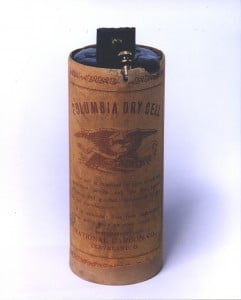 The battery that Alice used for her gown was likely a variety of Georges Leclanché’s dry cell batteries, used to also power early telephones. Only a decade later would the first mass-produced model of dry cell batteries be introduced, making portable devices practical. The Electric Light gown was one of the first uses of portable electricity, and for the sole purpose of personal expression.

Fast forward 132 years, wearable technology is all the rage. A lot of interests around wearables have been focused on their functionalities. Perhaps a lesson to be learned from the first wearable electric gown is that craftsmanship and clever self expression is what makes a wearable memorable.

Filed under: wearables — by Jiashan Wu

Comments Off on The First Wearable Electric Gown #WearableWednesday