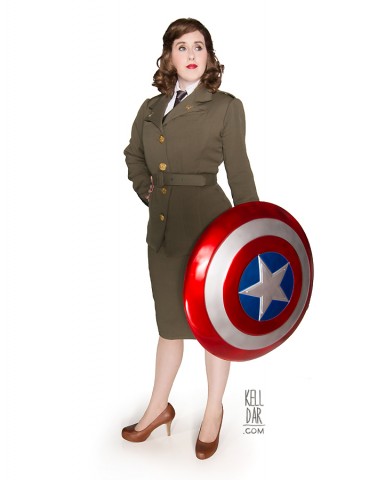 Peggy Carter first appeared in the Marvel Cinematic Universe in Captain America: The First Avenger. She’s now starring in her own miniseries on ABC titled Marvel’s Agent Carter. It is absolutely worth watching, and I have a hunch Peggy’s many elegant ’40s ensembles are going to inspire several costumes at conventions this year. Her outfits in The First Avenger did, and cosplayer Kelldar made Peggy’s World War II-era uniform from that film from the ground up. She used a Simplicity 1402 pattern for the jacket and accessorized it with a tie she found online, shoes from Target, and a briefcase that belonged to grandfather.

Here are some of her construction notes:

Jacket: My fabric I picked up while we were in Atlanta for Momocon – a wool I dyed greener. I started out with the pattern above, and used the basic pieces to make a mock-up jacket out of some felt I had. I got it fitted and edited as I wanted it – adding the seams and darts in the front. Once I had the mock-up the way I wanted, I used the felt pieces as patterns for cutting out my wool. I lined the interior and added the welted pockets – they are functional but I sewed them closed.

The buttons I bought off ebay, and the SSR badges I bought from kevinericon on the RPF. I had the worst time making the button holes on this jacket – the fabric was too thick. But I got them finished and they’re functional.

Skirt: The skirt I made using a skirt of my own as a pattern. It is lined to the knee and zips up the back. After I finished it I noticed the slit in the back had a pleat – I made one to add to it but decided to leave it off, as it was looking bulky.