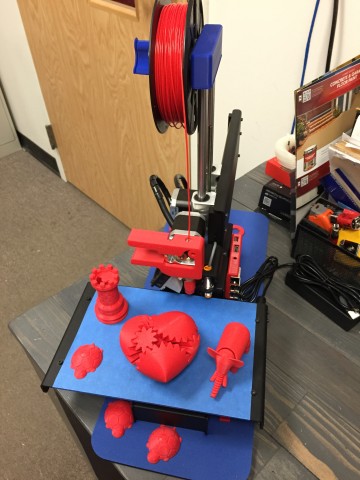 It’s been a little over a week since I’ve had my Printrbot Simple Metal and I thought I would share my take on this great little printer. First my background in 3D printing…i.e. what gives me the right to voice my opinion on a 3D printer. I have been the Lead Dream Consultant (i.e. facilities tech) at TechShop Pittsburgh for just about 2 years. In those two years, I’ve had the chance to use/service/build from scratch a few different 3D printers. I’ve also learned a great deal in the matter from ZeGo Robotics in building one of their delta style robots (great robot/printer/cookie decorator by the way). I’ve also had a chance to really see a Makerbot Replicator 2 and 2x be put to hard use by members new and experienced to the 3D printing world. With all that said, in an effort to get a simple to use machine for home use, I sought out the Printrbot Simple Metal (Assembled).

Why assembled some may ask. Aren’t you a maker! Indeed I feel I am. However, having already experienced a full build of a ZeGo robot and countless repairs to our Makerbots, I felt I had done my due diligence and wanted to get down to 3D printing! I had kept my eye on the Printrbot Simple Metal since it’s first days being introduced in a video by Make: . Alas, I missed out on the limited red edition. The choice was easy to make as there are already countless reviews out there and a friend or two had already had great success with one.

After unboxing, always a favorite activity of mine, I immediately plugged it in and got down to business. I did the recommended test that Printrbot suggests. First the cube. They ask you to print the basic cube and adjust the Z height in the gcode terminal. Not too tough having come from the ZeGo bot and Prontrface (a program for controlling the printer). Once you get this dialed in you are ready to go. They recommend printing a fan shroud as well to help direct cooler air to the print. I did this and felt joy as I attached it to the fan mount. I was already making parts to improve what seemed to be an already awesome little printer.

The tool chain turned out to be more simple than I could have ever asked for, yet complex enough to satisfy a seasoned 3D printing veteran. Printrbot recommended to me to use Cura Slicer. Cura had a profile built in for the Printrbot Simple Metal so setup was extremely easy. With the prospect of potentially having a few of these printers for member use at TechShop Pittsburgh, the simple settings were very appealing. The advanced settings were great too and would potentially allow for teaching a deeper understanding of what the printer is doing and what can be changed in order to get better prints.

After the week with the printer. I’ve already gone through a half kg of filament (currently using Makerbot filament because I like the small spools). I will most likely be switching to Printrbot filament in the near future as it’s cheaper and sold by the same company as the bot. I recently acquired an LCD panel for controlling the bot with out a computer and after a quick test, I think I’m falling deeper in love with this printer.

You can’t go wrong on this little guy for $599 +tax. Ease of use and reliability makes this printer a huge contender for the Makerbot line. And to think, we could purchase almost five of these for the price of one Makerbot.

The picture below is of a scan of my head done in Skanect software with a Kinect 360. The glasses and hat were added using Tinkercad. Support was added using Meshmixer from Autodesk and finally it was printed on the Printrbot Simple. 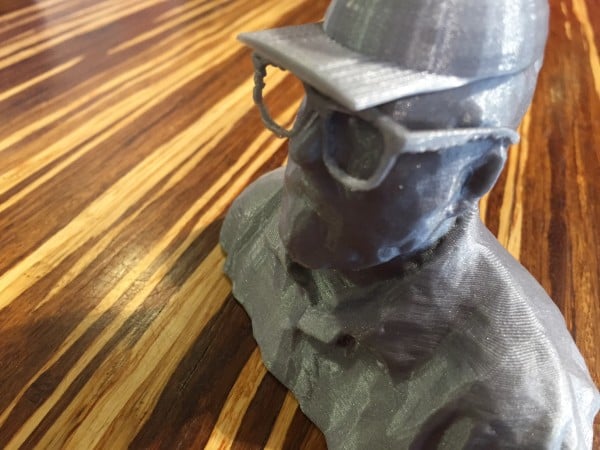