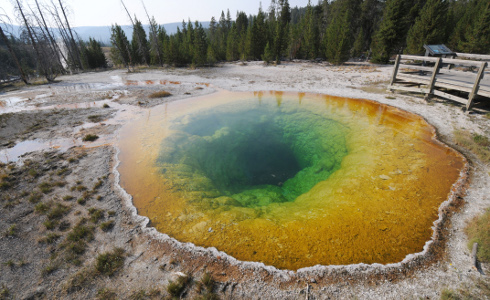 For decades, visitors have been captivated by the burst of yellow and green that characterizes Morning Glory thermal spring at Yellowstone National Park. But it hasn’t always looked this way. Using biological, chemical, and optical data, scientists have constructed a mathematical model that simulates how the spring looks now, and how it appeared before contamination led to changes in hue.

Morning Glory was once a deep blue, like the flower it’s named after. Over the years, however, tourists have tossed lucky coins, rocks, and other debris into the pool, partially blocking the underground heat source and lowering the temperature of the spring to a range habitable by photosynthetic microorganisms that probably didn’t live there before.

Pigments produced by swaths of those microbes—called microbial mats—are responsible, at least in part, for the brilliant yellows, greens, and oranges that now tinge Morning Glory and other thermal pools in Yellowstone. Each species has a preferred temperature, according to Brent Peyton, director of the Thermal Biology Institute at Montana State University. Because the springs are “hottest at the center and typically coolest at the edges,” a color gradient appears, he says.

But the colors we see also depend on the way light interacts with the water at different depths, a phenomenon that intrigued Joseph Shaw, director of the Optical Technology Center at Montana State University, and his team. “We lived right up the road from Yellowstone and were always wondering about the optics [of the pools],” he says.

Out of sheer curiosity, the researchers decided to develop a model that could mathematically predict the colors of Morning Glory (and other thermal springs) in the park, based on the interplay between light and the microbial mats. They used thermal cameras to measure the surface temperature of the pool and spectrometers to determine how much light was reflected. Then they combined these data with existing information about the pool’s physical structure.

The resulting model, published in the Journal of Applied Optics, accurately confirmed that Morning Glory’s color is dependent not only on microbes, but also on the way water absorbs and scatters light at different depths.

Specifically, in shallow water, the yellowish color of the pool is most influenced by the type of microbes present. But as the water gets deeper, “you see this yellow to green transition,” says Paul Nugent, a Ph.D. student at Montana State and lead author of the study. The model suggests that this transition can be attributed primarily to light’s interplay with water. Specifically, water scatters high-energy light at the blue end of the spectrum more than lower energy light associated with warmer tones. Lower energy light, meanwhile, is filtered through absorption. These effects are more pronounced at greater depths in the pool, causing deeper water to appear greener.

Based on the accuracy of their model, the team was eager to discover how it would predict the appearance of Morning Glory prior to contamination. When historically higher temperatures were considered, the analysis recreated the striking blue now preserved only in photographs. 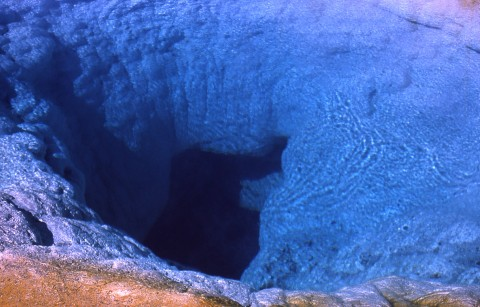