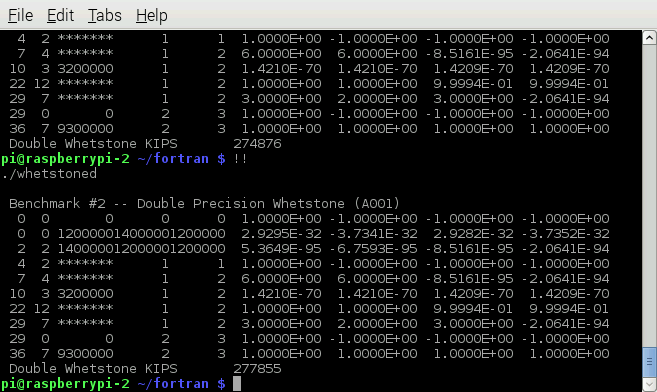 Benchmarking the Raspberry Pi2. via tenpencepiece

When I saw that the Raspberry Pi 2 had been launched earlier on this week, I immediately decided that I had to have one. My original Raspberry Pi had been slowly gathering dust on the study windowsill for a couple of years, largely because my initial enthusiasm for it had waned rather quickly. It was simply too slow and unresponsive for me to be able to do anything very interesting with it.
However, my experience so far with the RPi 2 is making me wonder why I bothered to buy a new PC towards the end of last year. For the princely sum of £29.93 (delivered) from CPC (plus an additional £16 for a 5V, 2.1A power supply – the 700mA phone charger that worked with my original model B simply wasn’t up to the job), it’s more than adequate for programming tasks.
The RPi 2 even runs a web browser sensibly, which is more than I ever really managed to achieve with my first RPi. (Geek note: this post was written on my RPi 2, using the Chromium browser).
But just how good is it? A number of people have been testing its performance by playing old computer games on emulators, but that seemed a little bit too subjective for my tastes.
So instead, I installed a FORTRAN compiler and dug out a copy of the double-precision Whetstone benchmarking program(+). An average of 10 runs over 100,000 loops each (on a single core of the quad-core ARM v7 processor of the RPi 2) gave me a result of 276,369 double Whetstone KIPS (thousands of instructions per second).

It’s only when you dig out the historical results for this benchmark(*) that you start to realise how astounding this performance figure is. For example, the VAX 11/750 that I used for the first time at Warwick University in 1982 delivered around 510 KIPS of performance and was typically shared by two dozen people at once. At particularly busy times you could wait for whole minutes simply for the text editor to start.
The Prime 9955 that was the mainstay of development work when I joined my first company, PAFEC, delivered 3,450 KIPS, according to its 1986 benchmark results. I still have my original contract of employment, which stated that staff who worked on “the computer” were encouraged to adopt some rather unusual working hours. The Silicon Graphics Indigo2, the workstation that everyone wanted to use in 1993 as it was a byword for high performance computing, clocked up a very respectable 90,000 KIPS.
It’s only when you get to the release of Pentium II based PCs in 1998 that you start to see similar performance figures to that of a single core of the RPi 2. And you need at least a Celeron M or Pentium IV based PC from 2003 or 2004 to match the performance across all four cores.
I suppose I really ought to knock the dust off my original RPi and see how it performs with the same code