Raspberry Pi and 3D printing seem to go together like peanut butter and raspberry jelly. There are so many different possibilities that inventors and innovators can come up with when combining these two brilliant technologies. We’ve seen uniquely created Raspberry Pi cases, as well as 3D printer control systems based on Raspberry Pi. Most interesting to me, however, are the 3D printed robots which use the device in order to operate.

We’ve covered numerous of these robots over the course of the past year or so, but none has been quite as unique as one which a high school computer teacher in Sydney, Australia has created. Tim Clark is always looking for ways to increase the engagement of his students. After all, that’s probably one of the main goals of most good teachers. Let’s face it though, most of today’s lesson plans are just flat out boring. Adhering to a school curriculum, while making lessons interesting and entertaining, is a huge challenge even for the best teachers. Clark, however, found the perfect solution. 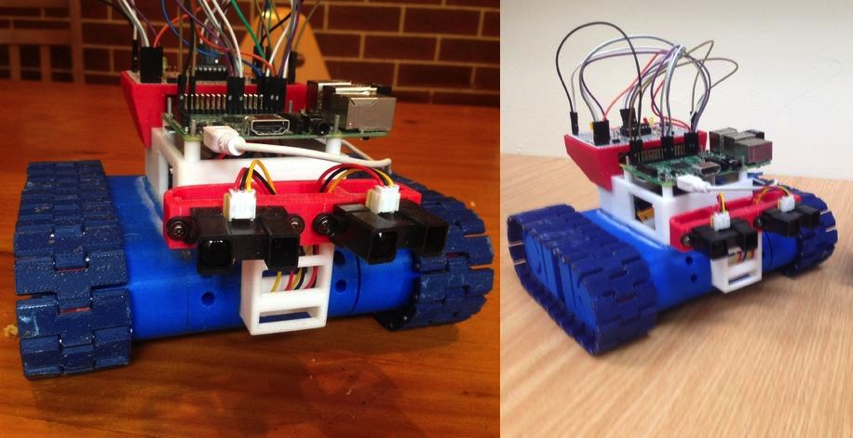 “Last year my school purchased a 3D printer and I began to use it to create brackets for the Raspberry Pi computers that I was using in class,” Clark tells 3DPrint.com. “At some stage during the year I came up with the idea of starting the ‘jRobot Project’. The concept is for the school to create a number of robots that my students can dock their own Raspberry Pi onto, connect up with a few jumper straps and start programming.”

One of the stipulations for the jRobot Project is that the parts these robots are built from may cost a total of no more than $100. The first robot that Clark and his students created was the Apogee, but the latest robot created is the Drogerdy. The Drogerdy is a tank-style robot that runs off of Raspberry Pi. It got its name from an Aboriginal Dreamtime story about a clever little wombat, which Clark felt was suiting.

“The Drogerdy is designed as a tractor style robot which is modular and expandable,” Clark tells us. “The need for a tank style bot was important as it exposes my students to specific programming concepts in a new and interesting way. Currently the tracks run around a two cog assembly, but I have designed an expansion piece to enable the track to be almost twice as long.”