3D print and build your own super light quadcopter. via instructables

The aim of this project is to maximize the flight time/ battery life of the very famous Hubsan X4 quad-copter. This will show how you build your own for very low cost, simple to build and fun to play with. The 3D print is 100% designed by me for use with spare parts from the Hubsan H107L model. It consists of a chassis that fit a receiver, four 7x20mm motors, four 3mm LED´s and a clip to hold the battery.

The weight of this chassis is only 4.18g plus battery clip 0.49g. The whole quadcopter including chassis, clip, LED’s, motors, propellers and receiver is only 21g. Excluding battery, that is 25% lighter than the original H107L model which weight is 27.8g. Even loaded with a 380mAh battery it´s just 3.5g heavier than H107L without its battery.

Continuous flight time with a 380mAh battery was measured to 11.5 minutes. I don´t have a H107L to compare with but I think it´s maximum 10min. Please let me know it you have one!

Due to its low weight it´s also very quick and reactive. A great fun to play with. It´s robust enough to fly with but don’t expect it to take too serious damage. It´s optimized for weight, not robustness. Maybe if you print it with 100% infill and another material it could take more damage.

All 3D printable files are downloaded from my build at http://www.thingiverse.com/thing:681232

I include the original Rhino CAD file if anyone wants to modify the construction for improvements. It could easily be converted for the stronger 8mm motors for example. For more details of what parts to buy and how to actually build it, please read further! 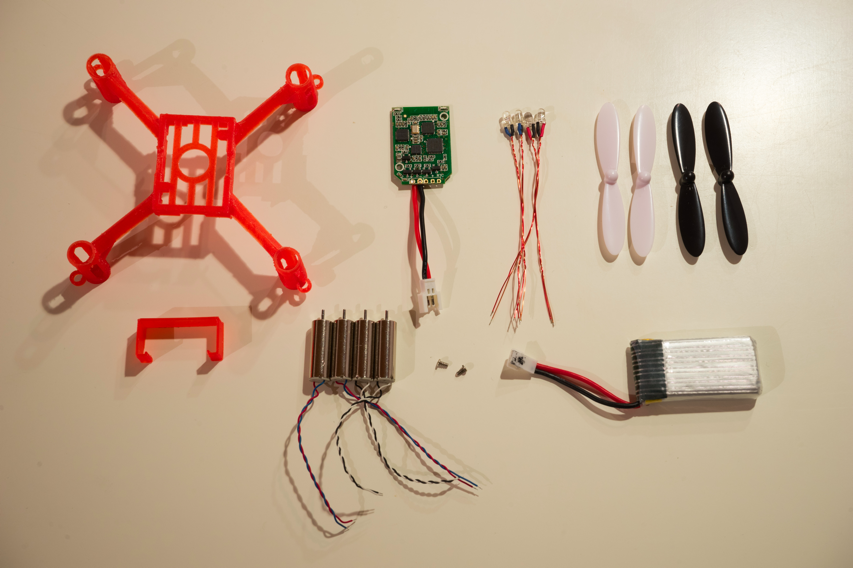 Prices can differ but you can find everything needed at Ebay. I will not provide with URLs as they change over time. Look for Hubsan h107c, except for the motors that must be for h107L. If you don´t already have a transmitter it´s probably more cheap to buy a whole quadrocopter with it included and take the parts from that.

Comments Off on Make A Super Light 3D Printer Quadcopter