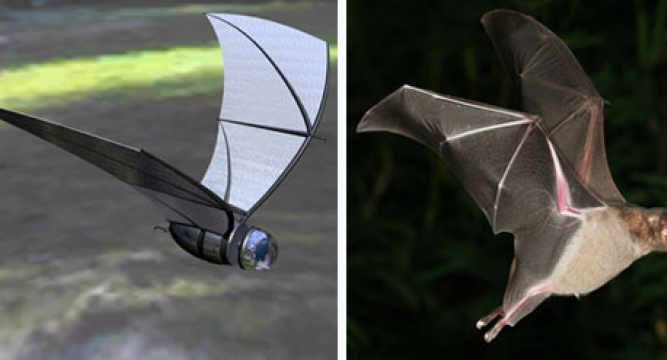 Bat inspired robot to help with search and rescue missions. via news nation

Researchers are developing a new vampire bat-inspired robot that can walk as well as fly, allowing it to carry out search and rescue missions in multiple terrains.

The new robot uses adaptive morphology inspired by the common vampire bat, Desmodus rotundus, meaning that the wings have been actuated using a foldable skeleton mechanism covered with a soft fabric such that they can be used both as wings and as legs (whegs).

Called the DALER (Deployable Air-Land Exploration Robot), the robot is being designed by a team from the Swiss Federal Institute of Technology Lausanne (EPFL) and The National Centre of Competence in Research (NCCR) Robotics, Switzerland, for use in search and rescue operations.

The robot will be able to fly long distances to survey large spaces in a short timespan and walk into dangerous or inaccessible areas.

One of the main issues in using a flying robot to navigate in small areas when walking is the surface areas of the wings, researchers wrote in the journal Bioinspiration and Biomimetics.

On a flying wing shaped robot, in order to maintain flight the wings must be wide, meaning that they cannot fit into smaller spaces.

By observing D rotundus, researchers came up with a solution where a foldable actuator is used to allow the wings to fold into a smaller space and to rotate around a hinge attaching the whegs to the body, allowing walking.

“An issue in creating a fixed wing drone capable of walking on the ground is with the morphology due to the different centre of mass requirements for the two modes of locomotion,” researchers said.

“For this reason the DALER is equipped with foldable wings, so much like the bat that inspired it, the DALER can walk on its haunches,” they said.

The team found the optimal distance between the centre of mass of the robot and the axis of rotation of the wingerons, in order to minimise the cost of transport (ie energy efficiency) and allow the DALER to reach 20m/s in the air and 6cm/s on the floor, with a maximum step distance of 6cm.

Future development of the DALER will include the possibility to hover and to take off autonomously from the ground in order to allow the robot to return to the air and come back to base after the mission.

Comments Off on Bat Inspired Robot Being Developed #Biomimicry