I was asked to make a kinetic sculpture for a bike appreciation event. The plan was to make a plywood cutout of a human figure, which would be mounted on a bike with the feet affixed to the pedals. This way when the pedals were spun, the figure would move as if it was pedalling.

Unfortunately the event was cancelled when February in Seattle ended up exactly as wet as you might imagine. I had already started building the thing, however, so I really had no choice but to finish it and post it here. It was a moral imperative. 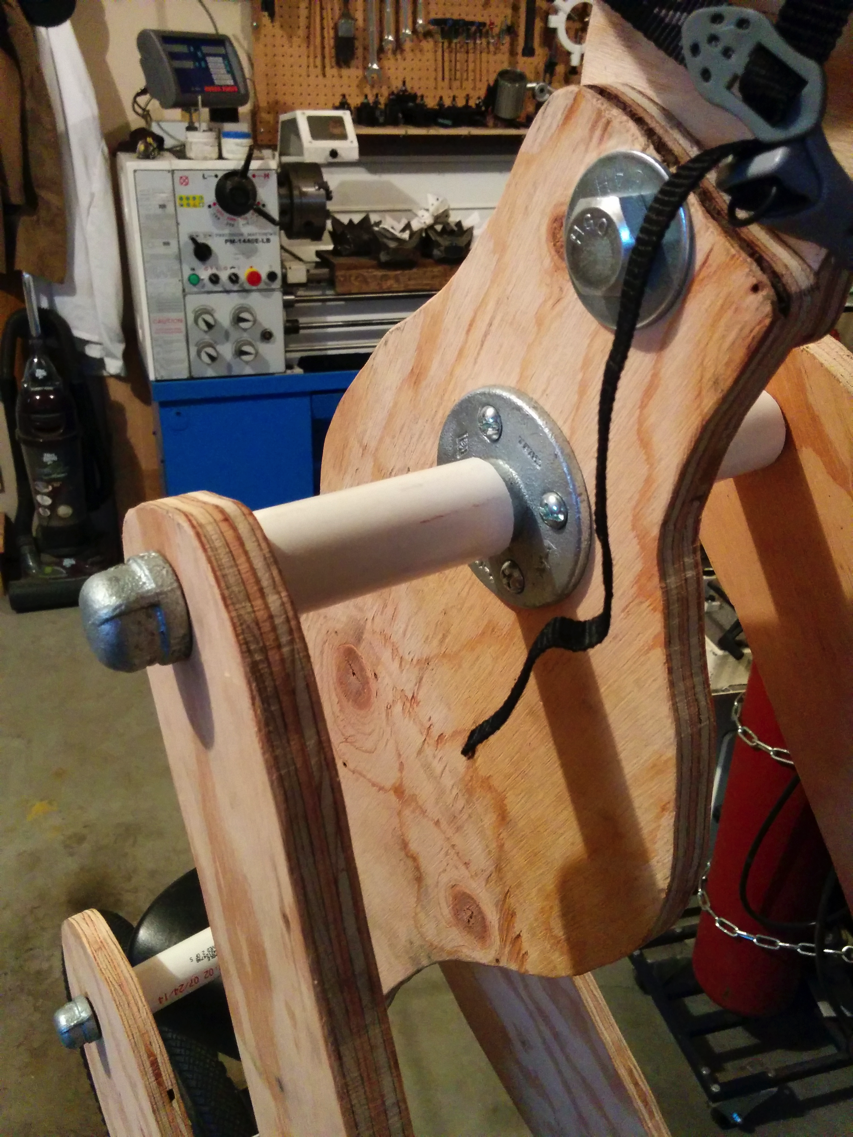 The articulated figure was cut out of 3/4″ plywood. A Google Image search found me a nice paper doll outline to work from. If you have a projector on hand, that would be the easiest way to transfer the outlines. Unfortunately I didn’t, so I just did it by eye. I measured the rough bounding box for each segment and scaled it up by a factor of 9 (chosen to roughly match my own dimensions), then sketched that onto the plywood. I decided to make the head a separate piece, though there was no technical reason for doing so. This let me adjust the angle to keep the head looking directly forward, no matter how the figure ended up being mounted on the bike.

I first started cutting out the segments using a reciprocating saw, but I was unhappy with the quality of the results. It was very hard to get the left and right versions of a segment to match each other. I pulled out an old desktop band saw and used that instead, with far better results. All in all, I used 2 2’x4′ sections of plywood, and that included remaking a couple segments.

The knees, elbows and neck were attached using 5/8″ bolts. That was much beefier hardware than strictly needed, but I felt it was more in scale with the project as a whole. The hip and shoulder joints had to be spaced farther out, to reflect something closer to the width of a human body. I used 1/2″ pipe screwed into flanges which were bolted to each other through the torso piece with 1/4″-20 screws. Short sections of PVC pipe served as spacers, and pipe caps on the far ends held the segments in place.

With the addition of a bike helmet, the figure was done. I tested it on the bike and the pedalling action worked great when spun manually.

Comments Off on Making A Kinetic Biking Sculpture #ArtTuesday