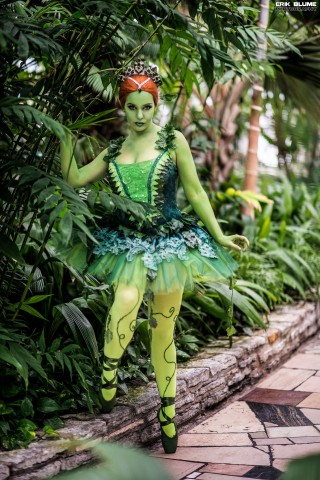 Poison Ivy is a popular character to cosplay. I see at least one version of her at every convention. The Batman villain has been around for decades and between comics, animated television series, live-action films, and video games, she’s worn several different costumes. Even if none of her many outfits are to your tastes, you can take the basic idea and turn it into something original.

Cosplayer Lisa Lou Who has done that with her ballerina Poison Ivy. The design is part of her Gotham Ballerina Sirens series. She’s taken Pamela Isley’s red hair and signature green attire to create a beautifully detailed costume. The leotard and tutu feature several different types and colors of fabric, vines and leaves were added to the tights, and the ballet slippers were likely dyed by hand. I love how Lisa turned this familiar costume into something unique.

via So Geek Chic, photo by Erik Blume Photography