Community Corner – February 20, 2015: The Featured Projects from this Week

Harri Ohra-aho shared a recent addition to his cat feeder. We love it!

Since the Arduino inside the cat feeder had free memory and pins I decided to go for a little Pavlovian experiment and play a jingle before serving. A valuable contribution to science! 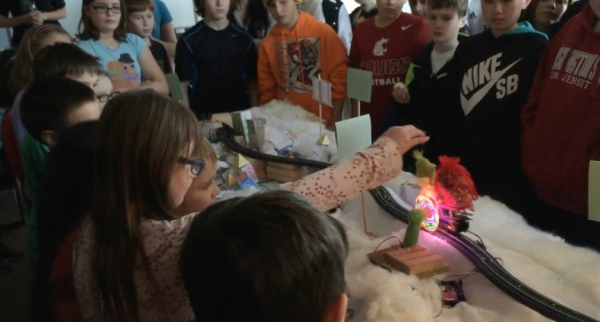 A big thanks to David Locke for writing in and sharing this wonderful and inspiring STEM Storybook Project completed by a 2nd Grade class using Arduinos! We’re super impressed by the class’s creativity, cooperation, and engineering skills. Watch the video on vimeo here.

Using Arduinos, second grade students brought the Grinch
story to life. Students at Brighton School, in Lynnwood, Washington first
learned how to wire input and outputs to Arduino Megas. They learned to
program their Arduinos using the Chapters Programming Language using an SD
card and then connected the Arduinos to sensors along the Grinch’s path as
he made his way down the mountain. They connected the Arduino outputs to
lights, a snow fan and a chocolate fountain so that as the Grinch came down
the mountain the sensors sensed his approach and the Arduinos turn on the
lights and devices to bring the down back to life.

The programming was done using the Chapters Programming Language – a simple
interpreter running on the Arduino which parses and interprets simple
Chapters code students have written and loaded on SD cards. The project used
4 Arduino Megas with battery packs, 4 SD card shields, various wires, a
PowerSwtich Tail || to connect the chocolate fountain, various LED’s to
light the town and different scenes, and a small battery powered fan. We
also had lots of decorations and a train repurposed as the Grinch’s sleigh
that was not powered by the Arduinos.

At Brighton School, in Lynnwood, Washington, 2nd Grade Students in Mrs. Figel’s class connected Arduino boards to motion sensors to track the progress of the Grinch coming down his mountain to return presents. As the Grinch approached, they programmed the Arduino microcontrollers to turn on a snow fan, spinning Christmas trees, village lights and even a chocolate fountain. This video shows the process and the final STEM Storybook event.

There are people making amazing things around the world, are you one of them? Join Adafruit Community! And check out scores of projects they shared this week after the jump!

Comments Off on Community Corner – February 20, 2015: The Featured Projects from this Week