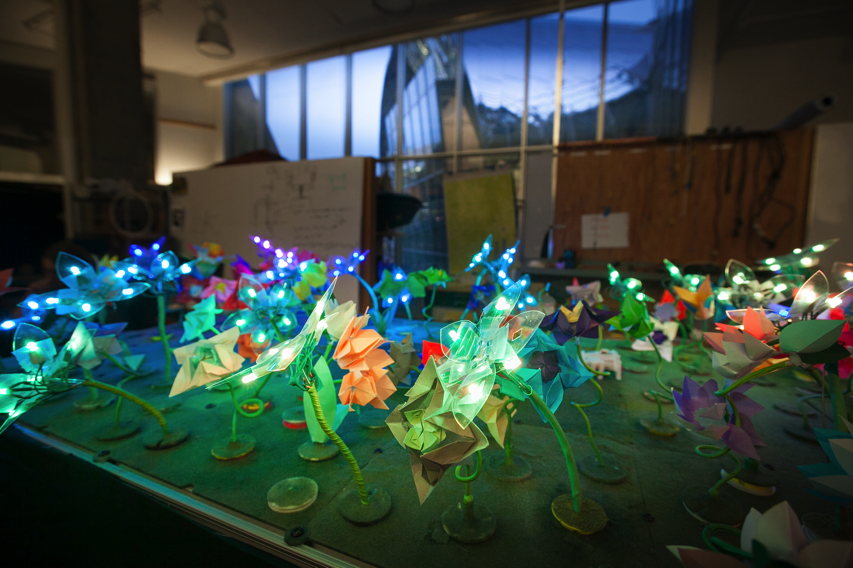 Here’s one way to get kids excited about programming: a “robot garden” with dozens of fast-changing LED lights and more than 100 origami robots that can crawl, swim, and blossom like flowers.

A team from MIT’s Computer Science and Artificial Intelligence Lab (CSAIL) and the Department of Mechanical Engineering have developed a tablet-operated system that illustrates their cutting-edge research on distributed algorithms via robotic sheep, origami flowers that can open and change colors, and robotic ducks that fold into shape by being heated in an oven.

In a paper recently accepted to the 2015 International Conference on Robotics and Automation, researchers describe the system’s dual functions as a visual embodiment of their latest work in distributed computing, as well as an aesthetically appealing way to get more young students, and particularly girls, interested in programming.

The system can be managed via tablet or any Bluetooth-enabled device, either through a simple “control by click” feature that involves clicking on individual flowers, as well as a more advanced “control by code” feature where users can add their own commands and execute sequences in real-time.

“Students can see their commands running in a physical environment, which tangibly links their coding efforts to the real world,” says Lindsay Sanneman, who is lead author on the new paper. “It’s meant to be a launchpad for schools to demonstrate basic concepts about algorithms and programming.”

Each of the system’s 16 tiles are connected via Arduino microcontrollers and programmed via search algorithms that explore the space in different ways, including a “graph-coloring” algorithm that ensures that no two adjacent tiles ever share the same color.

“The garden tests distributed algorithms for over 100 distinct robots, which gives us a very large-scale platform for experimentation,” says CSAIL Director Daniela Rus, the Andrew and Erna Viterbi Professor of Electrical Engineering and Computer Science and a co-author of the paper. “At the same time, we hope that it also helps introduce students to topics like graph theory and networking in a way that’s both beautiful and engaging.”