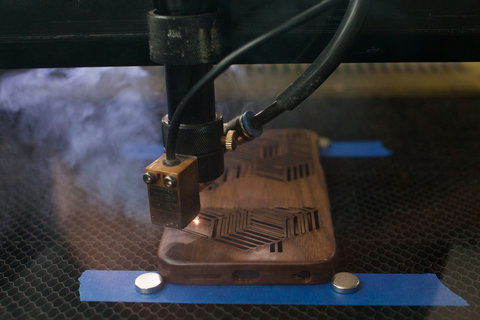 The New York Times Bits blog has an interesting post on laser cutting – check out the full piece here.

The desk space next to PCs first welcomed paper printers and later made room for three-dimensional printers that could conjure any shape from spools of plastic.

Now new devices, including laser cutters and computer-controlled milling machines, are coming out of industrial workshops and planting themselves on desktops. The wave of new machines is bringing a new level of precision to people who make physical objects — from leather wallets to lamps to circuit boards — as a career or hobby.

It is part of a familiar theme in tech. Computers help transform expensive, complicated machines used by the few and make them more accessible to the many. The creative types — designers, craftsmen, tinkerers — take it from there.

“Your creativity is no longer limited by tools,” said Dan Shapiro, co-founder and chief executive of Glowforge, a start-up in Seattle’s industrial SoDo neighborhood that is developing a laser cutter.

Glowforge operates out of a cavernous warehouse, next to a marijuana processing center, where it has created a prototype of a desktop laser cutter that it plans to sell for around $2,000, much cheaper than comparable machines. Glowforge says the device, which Mr. Shapiro calls a 3-D laser printer, will come with software that makes it much easier to operate than laser cutters usually are.

Laser cutters have been around for decades, used in industrial manufacturing applications to engrave or slice through almost any material you can think of, including steel, plastic and wood. The computer-controlled lasers in them make precision cuts that would be almost unimaginable by hand, except by highly skilled artisans.

Over the years, the machines have become a bit smaller and more available to ordinary people, largely through so-called makerspaces, open facilities aimed at designers, do-it-yourself enthusiasts and others that are sometimes housed in schools and sometimes privately owned. The machines have developed a strong following among jewelry makers, print makers and other artisans, many of whom have hung shingles out on craft sites like Etsy.

In fact, makerspaces report that they are often overwhelmed with demand for their laser cutters and see far less use of 3-D printers, which are slow, more limited in the materials they can work with and sometimes fiendishly hard to operate.

“That laser cutter is going all the time,” said Chris DiBona, an engineering director at Google, describing the makerspace at his daughter’s school. Laser cutters are so fast, he said, it was easy to to produce an object, tweak its design and create something new.