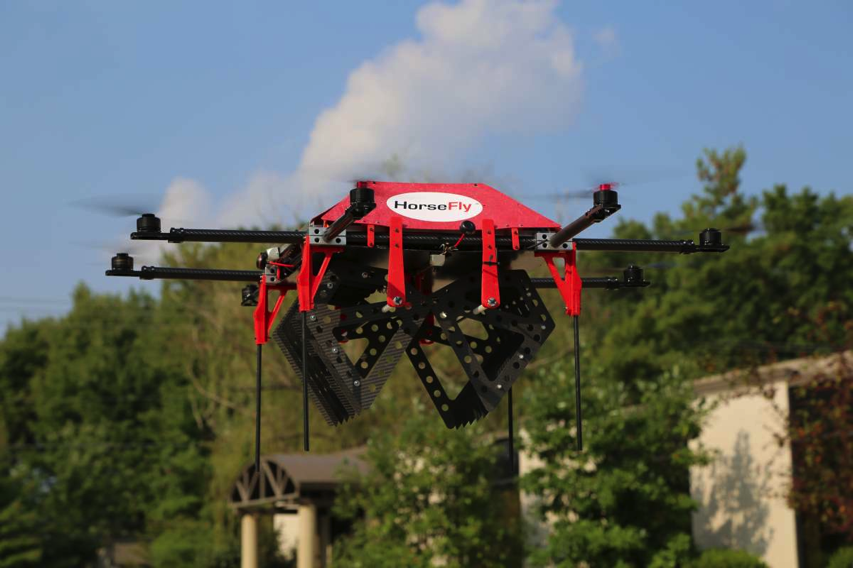 The idea of delivery drones may still be alive and kicking with Amp Holdings’ Horsefly. via Popular Science:

Amazon’s drone delivery service was never going to work. Not in the United States, at least, and not in the near-future timeframe announced by CEO Jeff Bezos in a credulous 60 Minutes segment in December 2013. When Bezos made the prediction that self-guided drones would start delivering packages to customers’ doors as early as 2015, it was clear to everyone building, flying and hoping to fly drones that the Federal Aviation Administration (FAA) had no plans to allow for something like Prime Air to function. Amazon’s program requires autonomous flight in densely populated areas—robots flying themselves, over lots of human beings. There’s no better recipe for disaster, at this early stage in the development and deployment of commercial drones.

And yet, Amazon’s PR stunt went off without a hitch. [Note: Popular Science just ran a Q&A with the VP of Prime Air, who seems like an excellent and conscientious person. My crotchety opinions of Bezos, 60 Minutes, and the way Amazon’s drone program was debuted are my own.] Despite denouncements in the media, the company’s plan become synonymous with the push for commercial drone rules in the U.S. Now that those initial regulations have arrived, the attention is still on Amazon, and whether it’s going to take its delivery drones to another country, presumably one with less stringent safety requirements. The FAA’s requirement that unmanned aircraft stay within a human’s unbroken line of sight throughout its operation is a deal-breaker for Prime Air, as is the restriction on carrying external payloads. That Amazon’s scheme is grounded is not news. It was always going to be.

But there’s hope yet for drone delivery. Cincinnati-based Amp Holdings is currently developing a drone, called Horsefly, that deploys from a compartment in the roof of an electric delivery truck. After each delivery, the aircraft would return to the truck for its next package. It’s strong enough to carry parcels as heavy as 10 pounds (double what Amazon is shooting for), and durable enough to fly through, wind, rain and snow on its appointed rounds.

It’s easy to see why this system hasn’t fired the public’s imagination, or come close to edging out coverage of Amazon’s vision. Delivery trucks—even the electric ones that Amp makes—are unassuming workhorses, and a drone that more efficiently distributes packages within a mile or two radius of that truck is less evocative than the thought of fleets of robots dotting the skyline of major cities.