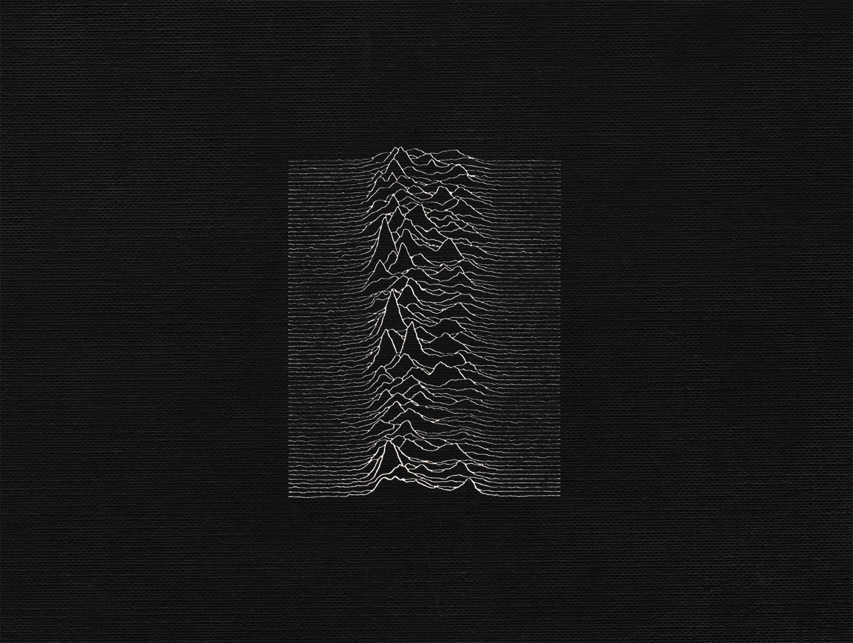 Many of our readers probably already knew that the cover of this album featured pulsars – but for those who didn’t Scientific American posted a great piece on it that goes even more in depth than what we knew before. We love this album and the story behind the cover makes it that much cooler.

Sure, I was familiar with the graphic—and I’m not alone. Drop this image (right) on someone’s desk and chances are they’ll reflexively blurt, “Joy Division.” The band’s 1979 Unknown Pleasures album cover leaned entirely on a small mysterious data display, printed in white on black. No band name, album title or other identifiers. An interesting move for a debut studio album.

The cover image became an icon but remained mysterious. Even as knowledge spread about the band’s inspiration point—a preexisting pulsar data visualization (more on this below)—the true origin of that visualization continued to be a bit of a riddle. Somewhere along the way, I became obsessed with the narratives behind pulsar discovery and stacked plots, along with a growing desire to learn all that I could about the image and the research it was connected to. What follows is an abridged story borne of that obsession, starting with a video screened at a data visualization conference and ending with an interview with Harold (Hal) Craft, the radio astronomer who created the plot from data collected at the Arecibo Radio Observatory.

In late 2012 I saw the Unknown Pleasures album cover in a new light. VISUALIZED conference attendees were treated to a screening of Data Visualization, Reinterpreted: The Story of Joy Division’s Unknown Pleasures Album (directed by Eric Klotz and Volkert Besseling). Check out the video below for an interview with the album cover designer, Peter Saville.

As Saville explains, the cover is directly linked to a figure in The Cambridge Encyclopaedia of Astronomy (1977 edition)—a stacked plot of radio signals from a pulsar. My interest was piqued. I’m far from a music and album art expert but visualizing astronomical phenomena is part of my job description. Although I jotted down notes, my intention to look further into things faded.

Then, nearly two years later, when chatting with artist Philippe Decrauzat about his influences, my jaw hit the floor. His collection of favorite 1960s and 1970s Scientific American graphics included the stacked plot. It had been printed as a full-page figure in the January 1971 issue; white radio pulses on a field of cyan. My interest was piqued anew, to say the least.

When folks refer to the Unknown Pleasures cover, they generally just say that it shows a series of radio frequency periods from the first pulsar discovered. But what does that really mean? How does the physicality of a pulsar result in radio frequencies that translate into the famous stacked plot? What produced the data, how was it collected, who created the plot and what is its significance?

Check out the full article here.