Scientists Use Lasers On Fish To Locate Their Origins 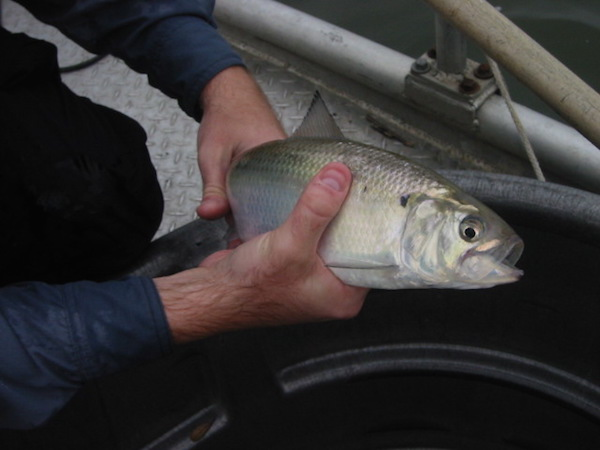 Scientists bean lasers at fish’s ear bones to find out where they were born. by Justine Hausheer via blog.nature.org

It may sound like a riddle, but this technique is helping Nature Conservancy scientists protect the Alabama shad, which once swarmed up Gulf-coast rivers as far north as Iowa by the millions to spawn. But shad populations plummeted in the last century, as dams blocked their path upriver.

As covered previously on Cool Green Science, Steve Herrington, the director of freshwater conservation for The Nature Conservancy’s Missouri program, devised an ingenious way to help shad in Florida’s Apalachicola River make it beyond the Jim Woodruff Dam.

Using a PVC pipe and a pump to create the sound of running water, Herrington and his partners at the U.S. Army Corps of Engineers, the U.S. Fish and Wildlife Service, the National Oceanic and Atmospheric Administration, the Florida Fish and Wildlife Conservation Commission, and the Georgia Department of Natural Resources were able to coax the shad into the lock used to transport boats over the dam.

Called “conservation locking,” this technique successfully transported fish over the dam to spawn upriver, and the shad population increased by more than four fold, to an estimated 120,000 fish as of 2012. A recovering shad population is good news for the region’s sport fisheries, too, as young shad are likely an important source of prey for largemouth bass.

But Herrington wanted to know if the shad born upriver were able to reverse the journey and rejoin the rest of the population. “We believed the population was increasing, but we didn’t know if that was because fish spawned above the dam were making it down river,” he says. “The shad could have simply been spawning below the dam.”
And that’s where lasers come in. Herrington explains that a fish’s inner ear bone, or otolith bone, can actually tell scientists a lot about the fish’s life. These minute, oval-shaped bones float inside the fish’s head and absorb chemicals from the surrounding water.
“If you shoot a laser at a certain place on the bone and burn it, you can read the ratios of key chemicals,” explains Herrington. “It’s like reading the rings on a tree,” Those elements can tell you how old a fish is, if it moved between fresh and salt water, and even where it was born.