Artificial Intelligence Goes to the Arcade 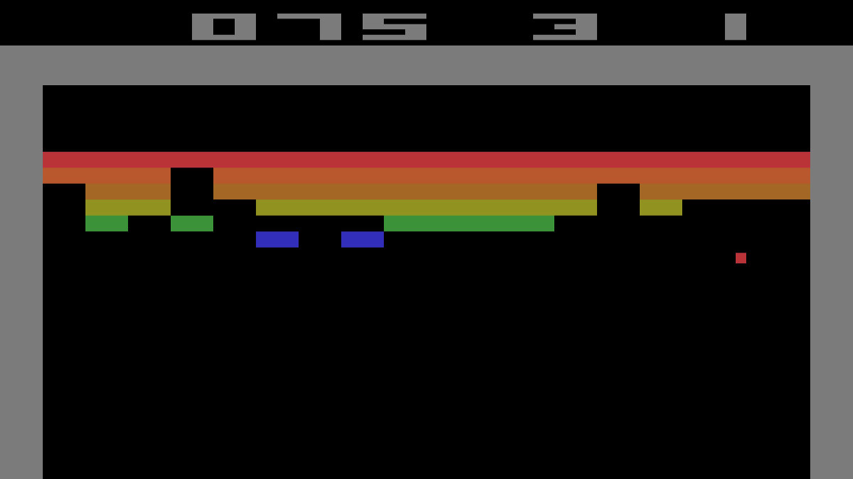 Artificial Intelligence Goes to the Arcade by Nicola Twilley of The New Yorker.

A shaky video, recorded with a mobile phone and smuggled out of the inaugural First Day of Tomorrow technology conference, in April, 2014, shows an artificially intelligent computer program in its first encounter with Breakout, the classic Atari arcade game. Prototyped in 1975 by Steve Wozniak, the co-founder of Apple, with assistance from Steve Jobs, the other co-founder of Apple, Breakout is a variant of Pong, in which a player knocks bricks from a wall by hitting a ball against it. After half an hour of play, the A.I. program is doing about as well as I would, which is to say not very—but it is trying to move its paddle toward the ball, apparently grasping the rudiments of the game. After another thirty minutes, two hundred rounds in, the A.I. has become a talented amateur: it misses the ball only every third or fourth time. The audience laughs; isn’t this cool?

Then something happens. By the three hundredth game, the A.I. has stopped missing the ball. The auditorium begins to buzz. Demis Hassabis, the program’s creator, advances to the next clip in his video presentation. The A.I. uses four quick rebounds to drill a hole through the left-hand side of the wall above it. Then it executes a killer bank shot, driving the ball into the hole and through to the other side, where it ricochets back and forth, destroying the entire wall from within. Now there are exclamations, applause, and shocked whispers from the crowd. Hours after encountering its first video game, and without any human coaching, the A.I. has not only become better than any human player but has also discovered a way to win that its creator never imagined.

Comments Off on Artificial Intelligence Goes to the Arcade