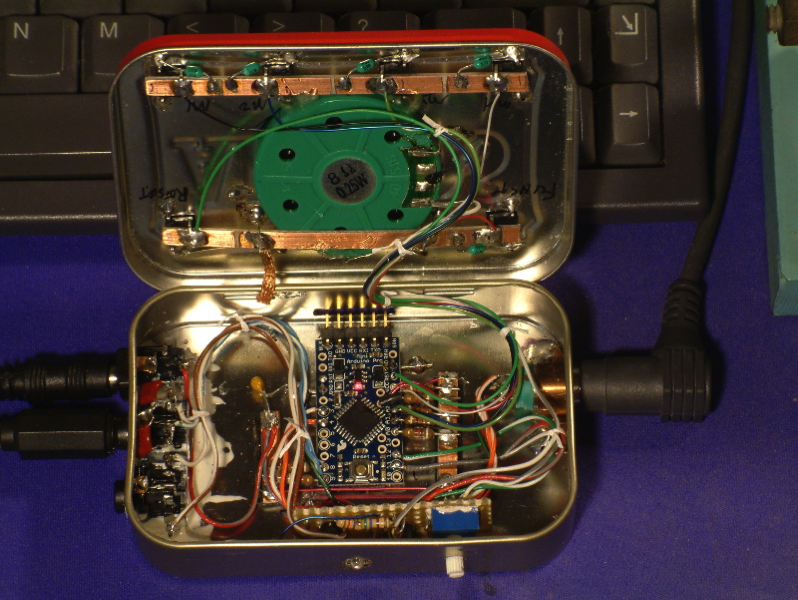 James Harvey made an Arduino based iambic keyer. via wb8nbs

Richard Chapman KC4IFB published an article in the Sep/Oct 2009 QEX magazine (subscription required) for constructing an Iambic Keyer on the Arduino platform. I downloaded his code from the QEX web site (ARRL membership required) and found it worked well.  I have not been active in Ham Radio for years and my morse code is seriously rusty, so I decided to build a keyer for practice purposes and maybe to use on a real radio some day when I figure out how to get an antenna up on this small lot.  I have a WB4VVF Accu-Keyer I used with my homemade paddles long ago.  I bought the PC board from WB4VVF himself at the Dayton Hamvention.  Chapman’s keyer implementation on the Arduino Uno felt exactly the same and I had no problem getting used to it.

I wanted to see if this code would run on an ATtiny85 chip. These are beautiful little microcontrollers in an 8 pin DIP package. They have 8K of internal flash memory and with a minor bit of library downloading, are programmable via the Arduino IDE.  There is a catch though, tiny85 does not normally have bootloader code like a formal Arduino does so you need additional circuitry to burn your sketch onto the little chip. In July 2013 Jim Williams from Workshop 88 in Glen Ellyn conducted a class in tiny85 programming which I attended. At the end of the class we all had our own Arduino ISP adapter board and could burn a tiny85 by using an Arduino UNO as an intermediary.

I amped up my ISP adapter by adding a ZIF socket. It also can program the ATMega328 chips by moving five jumpers.

Comments Off on Ham Radio Morse Code Keyer With Arduino