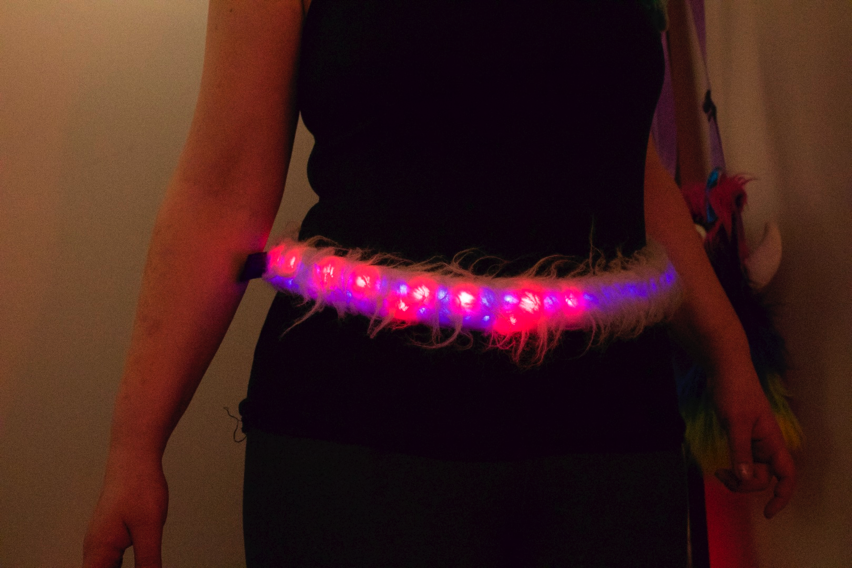 This is an Instructable to show you how to make an interactive, fuzzy LED belt! Belt can be used in many ways, not just as a belt… wear it as a bandolier, hang it on the wall, wrap it around your backpack or bike… the options abound.

And the most exciting part is this belt is alive! Using two sensors — a gyroscope and a microphone — this belt responds to sound and also to being moved. So, when you dance with it at a music event, the colors of the LEDs reflect your movement and the brightness of the LEDs reflect the sound. So much fun! The belt never really looks the same. 🙂

I first made this belt in 2012 — it was my first project with an Arduino and LEDs, and since then I’ve remade this belt a few times and added more LEDs and sensors. But this is a great project for someone starting in with electronics. And you don’t have to add the sensors for this belt to be awesome and fun. Make it as challenging as you feel comfortable!

Materials:
• Addressable RGB LED strip – I used the WS2811/12 strip, 60 LEDs/meter with silicone sleeve to better protect the LEDs
• A belt, preferably nylon (like this)
• White shaggy faux fur (like this or this)
• An arduino – I used the Arduino Pro Micro (5v/16Mhz), but would recommend using the DFRobot Beetle which is cheaper and smaller than the Pro Micro, but otherwise the same chipset and capabilities.
• A gyroscope – I used the L3G4200D
• A microphone – I used the Electret microphone
• Lipo battery – 1000mAh 3.7v
• Lipo charger board – I used this generic one and these JST 2-wire plug connectors…but you could also use one from Sparkfun and skip the connectors
• Slide switch
• Electrical wire, preferably different colors – including red, black, and two other colors (I used orange and yellow)
• 3-wire servo connector male/female pair
• Clear electrical tape, or probably clear packing tape would work okay.
• Solder
Tools:
• Soldering iron
• Computer
• Sewing machine or needle and thread
• Micro USB cable
• Mini USB cable
• Xacto blade
• Wire clippers/cutters
• Wire strippers

Comments Off on Make An Interactive Fuzzy LED Belt