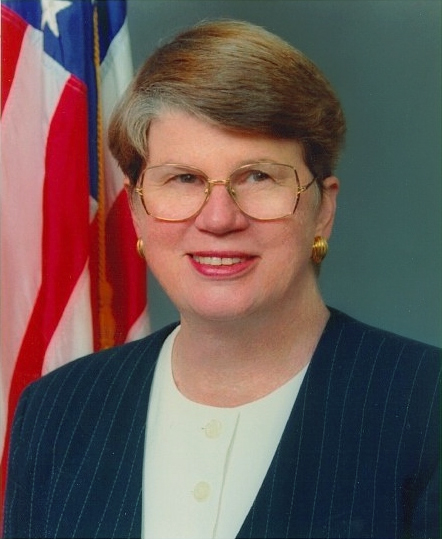 March is women’s history month! Each day we will highlight a woman who changed history in some way – today we honor Janet Reno, the first female Attorney General of the United States.

Janet Wood Reno (born July 21, 1938) served as the Attorney General of the United States, from 1993 to 2001. She was nominated by President Bill Clinton on February 11, 1993, and confirmed on March 11, 1993. She was the first woman to serve as Attorney General and the second longest serving Attorney General after William Wirt…

…After her tenure as attorney general and her unsuccessful gubernatorial bid, Reno tours the country giving speeches on topics relating to the criminal justice system. For example, on March 31, 2006, she spoke at a criminology conference held at the University of Pennsylvania. At this conference, she stated that she believes that the education system in the United States needs to be improved, as there is a link between the quality of education and the crime rate. She also believes that too much money has been diverted away from the juvenile court system and believes that the government should find some way to make the juvenile courts work effectively so as to prevent problems in troubled children and adolescents before these problems are exacerbated by the time these adolescents reach adulthood…

Reno also serves on the board of directors for the Innocence Project, a nonprofit organization which assists prisoners, who could be exonerated through DNA testing…

In March 2008, Reno received the Council on Litigation Management’s Professionalism Award, which recognizes and commemorates an individual who has demonstrated the unique ability to lead others by example in the highest standard of their profession.

On April 17, 2009, Reno was awarded the Justice Award by the American Judicature Society.[ Eric Holder, Attorney General under the Obama Administration, presented Reno the award. Seth Andersen, Executive Vice President of AJS said the award recognizes “her commitment to improving our systems of justice and educating Americans about our great common enterprise – to ensure equality under the law.” The award is the highest given by the AJS, and recognizes significant contributions toward improvements in the administration of justice within the United States.