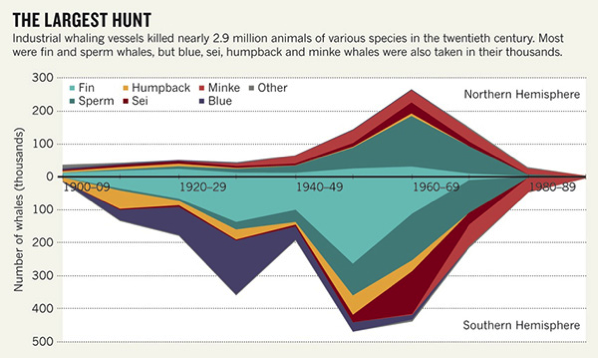 The first global estimate of the number of whales killed by industrial harvesting last century reveals that nearly 3 million cetaceans were wiped out in what may have been the largest cull of any animal—in terms of total biomass—in human history.

The devastation wrought on whales by twentieth-century hunting is well documented. By some estimates, sperm whales have been driven down to one-third of their pre-whaling population, and blue whales have been depleted by up to 90%. Although some populations, such as minke whales, have largely recovered, others—including the North Atlantic right whale and the Antarctic blue whale—now hover on the brink of extinction…

…“The total number of whales we killed is a really important number. It does make a difference to what we do now: it tells us the number of whales the oceans might be able to support,” says Stephen Palumbi, a marine ecologist at Stanford University in California. He thinks that 2.9 million whale deaths is a “believable” figure.