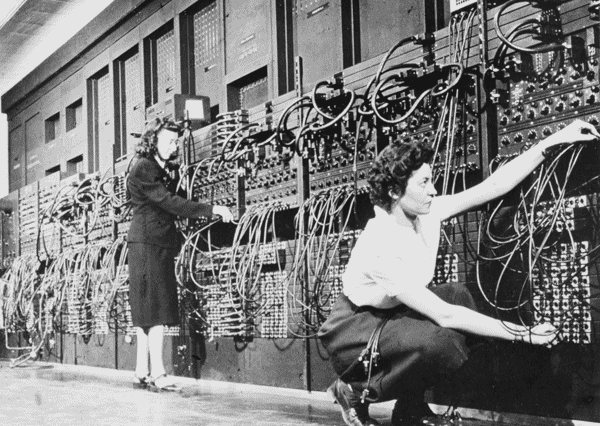 Great piece from Volume Labs on the history of women in computer sciences.

The American computer industry seems dominated by people like me — males. But it was not always this way.

While writing about SAGE in previous posts, I learned that at the beginning of the computer age, most programmers were women. My skills, including programming languages and tools, have a foundation built on the contributions of those who came before me. It turns out that I code like a girl, using concepts pioneered by women.

In the 1940’s and 50’s, there was a peak in women working as computers. Mathematically intensive industries like nuclear research, ballistics, and engineering often employed women to perform computations.

Do you remember “When Computers Were Women?” The article reminds us that a “computer” was actually a human being until around 1945. Afterward, a computer was a machine and humans were called operators.

In 1946, the first electronic general-purpose computer called ENIAC (Electronic Numerical Integrator And Computer) was built. This began a process of reducing and automating manual calculations.

At the time, there was a strong division between the male domain of hardware and the female sphere of software. Male electronic engineers built the ENAIC system. But since software design and programming were considered clerical work, women instructed the the 27-ton hand-built mass of wires and vacuum tubes to perform calculations in sequence.

In true programmer fashion, the women learned by doing. The hardware engineers dropped the blueprints and wiring documents on them and said, “Here figure out how the machine works and then figure out how to program it.” So the women crawled around the massive frame and learned how each component worked. They successfully understood the interplay between hardware and software and how the computer’s behavior could be traced to a hardware or a software issue.

Unfortunately, all the credit for creating ENIAC went to the men who conceived it and built the hardware. The media covered the debut of ENIAC in February 1946, which showed off the centerpiece calculation of a trajectory. The program created by Betty Snyder and Betty Jennings impressed the VIPs because it allowed the computer to calculate faster than the projectile itself. But the women were not mentioned, seen in pictures of the event, nor invited to the press lunch with the men. In the end, the computer was the star of the show, depicted as an autonomous brain.