Heya folks, Crow here.  Back in the 1960s and 1970s the Radio Corporation of America–better known as RCA–still made a vast selection of solid-state components one could get hold of some pretty interesting parts for not a lot of money.  I’ve mentioned their CMOS CPU, the CDP1802CE, before and I will talk about it further in a future blog, but today I wanted to talk about RCA’s BCD to 7-segment LED display driver chip.  This part was fairly standard in terms of display decoding, but it had one particular feature that made it more useful than the typical 7447/7448 or CD4543: constant-current segment drivers.  This means the current to a segment is constant no matter how many segments are lit and eliminates the need for ballast resistors. The RCA databooks are wonderfully complete in that they tend to go into detail about such chip features, and as seen below the segment driver circuit detail is shown which enables its use in circuits other than just those with a CA3161 in it.  In brief, the two-transistor plus one resistor circuit works as a programmable current sink where a logic high (5v) on the input turns on the (upper) drive transistor but as current flows from the collector to emitter a voltage drop appears across the resistor to ground.  This “program voltage” causes the bias (lower) transistor to conduct at a ratio proportional to its gain, and as a result reduces the amount of base drive into the upper transistor thus establishing a simple servo-feedback current-control system.  (This is also how an LM335 works, just with a reference diode instead of a bias transistor). This leads us to a couple interesting possibilities.  Since the current is constant, as long as the forward voltage of whatever connected LEDs was maintained, multiple LEDs could be illuminated at a constant brightness without having to worry about fluctuations in the input voltage.  This is a very useful thing for, say, automotive lighting.

One such application were my “car LED light bars” from 1992.  Back then I had this black-and-silver Ford Thunderbird and I wanted to add undercarriage lighting.  This of course meant I needed to either buy the kind that were common at the time (gas discharge tubes) or roll my own.  I made a series of boards such as the one shown below that had rows of red, green and blue LEDs, each with a constant-current driver assembly that, aside from an “enable” signal that activated the respective colors on demand, was the same circuit as noted above.  For those interested, the red and green LEDs used had a nominal forward voltage around 2v, which means I used four of them in a row.  Blue LEDs had a 5v forward voltage and were used in series pairs.  The “program resistor” is 22 ohms in these cases which worked out to about 20mA for each row.  The “enable resistors” are all 10K tied to a common signal.  As a result I was able to maintain a constant brightness from 10V up to over 20V at which point the transistors got a tad warm.   This simple circuit works just fine today for battery-powered applications where an indicator is needed that does not need to load a local voltage regulator in order to provide a status.  Cheers!  –Crow 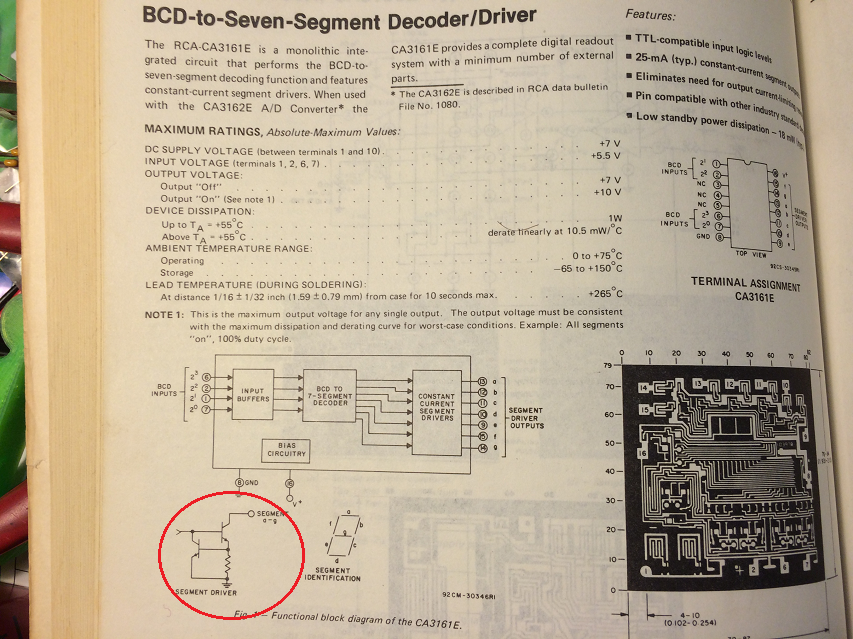