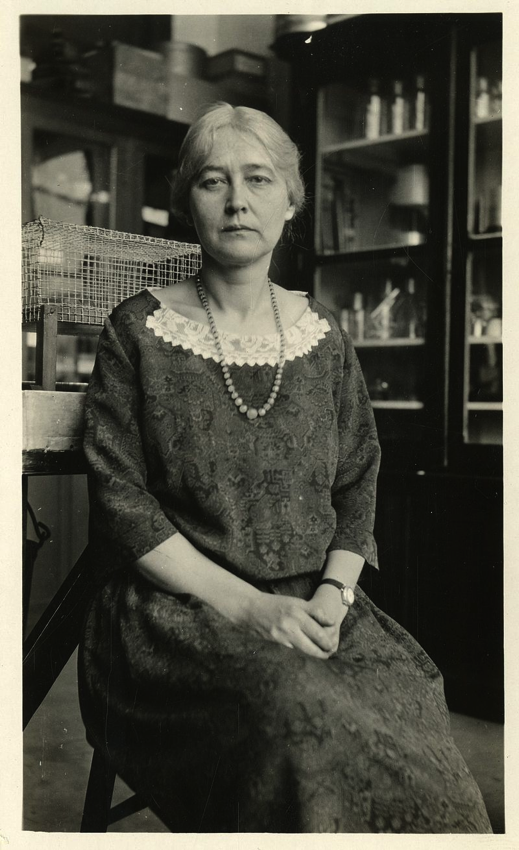 Maud Leonora Menten was a Canadian physician-scientist who made significant contributions to enzyme kinetics and histochemistry. Her name is associated with the famous Michaelis–Menten equation in biochemistry.

Maud Menten was born in Port Lambton, Ontario and studied medicine at the University of Toronto (B.A. 1904, M.B. 1907, M.D. 1911). She was among the first women in Canada to earn a medical doctorate. She completed her thesis work at University of Chicago. At that time women were not allowed to do research in Canada, so she decided to do research in other countries such as the United States and Germany.

In 1912 she moved to Berlin where she worked with Leonor Michaelis and co-authored their paper in Biochemische Zeitschrift which showed that the rate of an enzyme-catalyzed reaction is proportional to the amount of the enzyme-substrate complex. This relationship between reaction rate and enzyme-substrate concentration is known as the Michaelis-Menten equation. After studying with Michaelis in Germany she entered graduate school at the University of Chicago where she obtained her PhD in 1916. Her dissertation was titled “The Alkalinity of the Blood in Malignancy and Other Pathological Conditions; Together with Observations on the Relation of the Alkalinity of the Blood to Barometric Pressure”. Menten worked at the University of Pittsburgh (1923–1950), becoming an assistant and then associate Professor in the School of Medicine and head of pathology at the Children’s Hospital of Pittsburgh. Her final promotion to full Professor, in 1948, was at the age of 70 in the last years of her career. Her final academic post was as a research fellow at the British Columbia Medical Research Institute (1951–1953)…

Her most famous work was on enzyme kinetics together with Michaelis, based on earlier findings of Victor Henri. This resulted in the Michaelis–Menten equations. Menten also invented the azo-dye coupling reaction for alkaline phosphatase, which is still used in histochemistry. She characterised bacterial toxins from B. paratyphosus, Streptococcus scarlatina and Salmonella ssp. and conducted the first electrophoretic separation of blood haemoglobin proteins in 1944. She worked on the properties of hemoglobin, regulation of blood sugar level, and kidney function. She wrote or co-wrote about 100 research papers.

Comments Off on Happy Birthday to Maud Menten #WHM15 #WomensHistoryMonth