Many people buy a Raspberry Pi and it sits on a shelf for a while before they look into what to do with it. This is changing rapidly with the introduction of Computing on the National Curriculum and the Governments proposal to give a Raspberry Pi to every Year 7 in September 2015:

One of the most engaging experiments I’ve personally seen in action (and tried and tested on our recent open day at Scarborough College) is using a capacitive touch sensor to run programs on the Raspberry Pi. When coupled with Minecraft, this is the result.

The idea came from a post I saw by “Arghbox” on his blog which is well worth looking at:

He used an Adafruit capacitive touch sensor to control certain functions in Minecraft through the Raspberry Pi. I thought this was a really nice idea to engage students in some programming and electronics using a game they could all relate with, so I did my own. Adapting some of Martin O’Hanlon’s ideas I made my own python programme to make it a bit more visual for our open day.

This is my version of the code: I used a real flower to place a flower in Minecraft and used the properties of graphite as a conductor to write a word which, when touched, triggered the sensor. I also used a piece of code which took a picture using the Raspberry Pi Camera when you touched the Orange. Another feature which I forgot to put on the video was that one sensor was placed in a bowl of water, so when you dipped a finger in it, an area on Minecraft was cleared out. 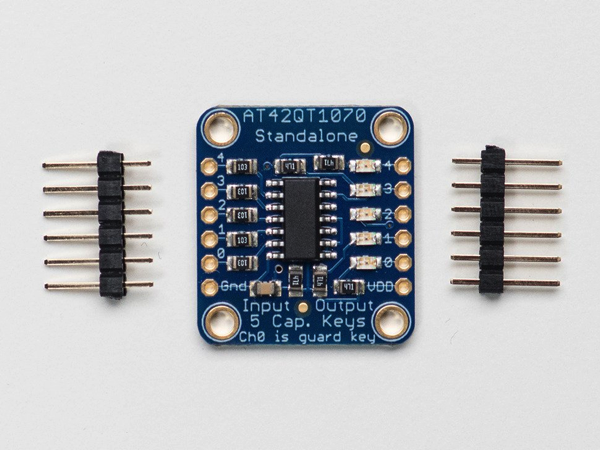 Standalone 5-Pad Capacitive Touch Sensor Breakout – AT42QT1070: This breakout board is the simplest way to create a project with mutiple capacitive touch sensors. No microcontroller is required here – just power with 1.8 to 5.5VDC and connect up to 5 conductive pads to the 5 left-hand pins. When a capacitive load is detected (e.g. a person touches one of the conductive contacts) the corresponding LED on the right lights up and the output pin goes low. You can use this to update an existing normal-button project where buttons connect to ground when pressed. Read more.