This Week in Why Adafruit Loves Science Fiction: Her Smoke Rose Up Forever #SciFiSunday 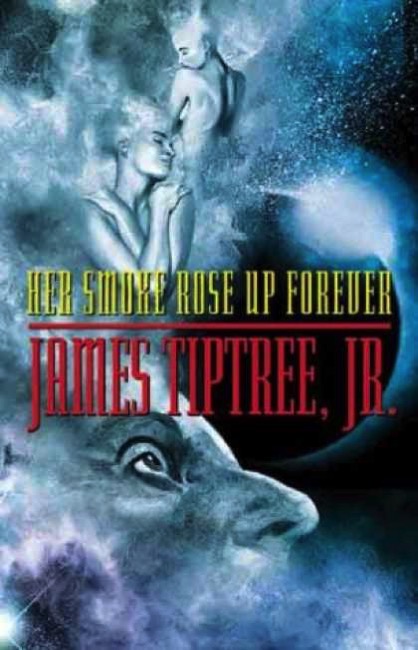 Whether it was that summer you hid out under a beach towel on your family vacation, devouring Dune, or the weekend you spent in your mid-twenties marathoning Battlestar Galactica to get over your most recent break-up, or even the time you realized your parents’ taste in movies was actually pretty cool after they made you watch the 1968 Planet of the Apes, odds are, you can name a moment when science fiction supplanted you from reality, shook your worldview up, and dropped you back off on planet earth, ever so slightly changed.

Over the next few Sundays, we’ll be featuring some of our science fiction favorites from around the Adafruit Office. This week, Zay, the head of the Shipping Department, shares the epic story behind his favorite science fiction short story collection, Her Smoke Rose Up Forever by James Tiptree, Jr. (Alice Sheldon).

My grandfather was First Fandom. That means he was a member of the very first science fiction fan club in the United States, a fact that places him at the heart of geek lore. Back then Science Fiction meant not only a progressive attitude towards science, but a progressive attitude towards politics. When he was 26 he flew to Spain to fight against the fascists with the International Brigades in the Spanish Civl War, an act that got him blackballed by the U.S. Government when he got back from the war. That’s what you get for being a premature anti-Fascist. For him science fiction was about how to make the world a better, more inclusive, fairer place. The books he pushed me towards held the politics if identity and the evolution of science in equal esteem.

So it was with great pleasure that my Grampa waited until I’d fallen in love with Tiptree’s writing to tell me the most important thing about my new favorite writer: “The thing you have to understand about James Tiptree, Jr.” my Grampa told me, “is that she’s a really smart woman.”

James Tiptree Jr. was the pen name for Alice Sheldon. She spent her early career with the Air Force, eventually promoted to major. This was in the 40s. She was smart, determined, and adaptable. Her determination to do her best for her country eventually led her to a role in the CIA. At the time Science Fiction was even more of a literary backwater than it is now. To protect her reputation from the lurid, pulpy reputation of SF she adopted the name James Tiptree, Jr.

Her work was exemplary, one of a very few SF writers at the time who elevated the field from the power fantasies of little boys to a visionary new form of literature. Sheldn’s work explored the boundaries of what it meant to be human, playing at the edges of man and woman, human and alien, profane and divine. In a time when plodding prose was the order of the day, Sheldon’s work had a fearless and propulsive lyrical quality that swept its reader along, ranging from painfully beautiful to roughly grounded in the span a few sentences.

Her Smoke Rose Up Forever collects 18 of Sheldon’s most fun, intense, and controversial work. It includes “Love is the Plan, The Plan is Death” a story that split my head open when I was a kid. In an an inventive and oddly intimate first person, “Love is the Plan” takes us through the life of a creature alien in mindy, body, gender, and sexuality. It struggles both with and against its deepest instinctual urges, learning again and again how different love can be at the beginning and end of life. The story is as relentlessly alien as it is heartbreakingly endearing, and more than earns its title, which is one of the best titles in the history of ever. Alice Sheldon is a master at titles. Other stories in the collection include “Houston, Houston, Do You Read?” “With Delicate Mad Hands,” and “The Women Men Don’t See,” a story all teenage boys should be forced to read.

For my Grampa, introducing me to Alice Sheldon was a political act. He believed that science fiction is as important as progressive politics when it comes to making the world a better place. He would have dug Adafruit.

The book is available on Amazon here. Image via Amazon as well.

Comments Off on This Week in Why Adafruit Loves Science Fiction: Her Smoke Rose Up Forever #SciFiSunday