Mostly True Tales: On the Hazards of Field Work, Part One

Hey folks, Crow here.  This time on MTT I present one of my own stories.  For the first fifteen years of my professional career I was an industrial instrumentation and power controls design engineer.  I made (along with my then-roommate and still one of my best friends–digital imaging expert Ed Hanway of ILM) one  of the first networkable PID controllers in 1985.  It was serial port based, and used a token ring scheme, but it was self-addressing and worked with up to 32 units and all coded in Z8 assembly.  The host program was written in Pascal and ran on an IBM-XT compatible situated in a factory control room.  Here are my prototype from 1985 and a production unit from 1988. (Yes, the in-house name  for this thing was “SPAM,” nevermind the letters just meant setpoint, parameter, autotune, manual). 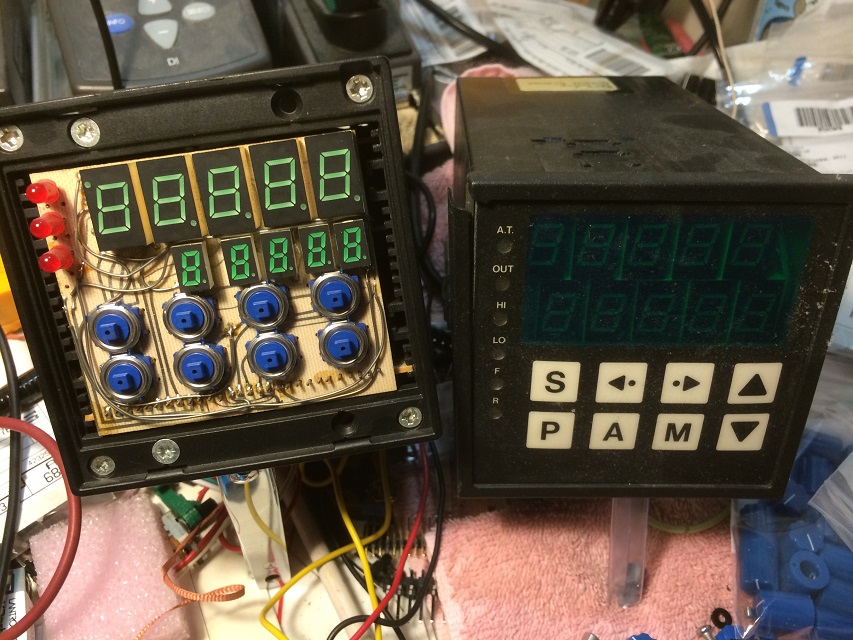 But this was all desk and lab work, where the most hazardous events were getting ferric chloride on your clothes or having a pop can-sized resistor explode, launching chunks of itself across the shop and through a window.  For the curious, this was a defective  resistor used as part of a dynamic braking control circuit on a 250HP three-phase electric motor.  The idea is to shut off the transistor driver bridges and connect high-power resistors across the motor phases in a “delta” configuration (A to B, B to C, C to A).  Except one of the resistors had an internal fault and overheated.  During dynamic braking the motor and load inertia act as a generator driving the resistor load in order to dissipate the energy and bring the motor to a controlled stop.  These resistors look like this:

These are close to the size of a 12-ounce soda can.  The ends are epoxy-sealed, but when they fail they tend to “blow out” the weaker of the two end seals.  I mean this literally: the entire resistor assembly would fracture inside the metal casing (which was very good at acting like a cannon barrel) and launch out of one end, usually on fire, and travel a dozen yards.  As this was thirty years ago, we didn’t have digital cameras or phones on hand, so the “hey a resistor just tried to kill me!  Let me take a selfie!” mentality just wasn’t there yet.

Part of my work back then involved “factory builds.”  A factory build in this sense happens when a customer purchased a number of control systems to be installed in a new factory under construction.  In these cases I was usually sent out to the factory site to supervise the installation.  This story involves two such factory builds, both at the same site in Canada.  The first time was in November of 1991, and the facility was a pitch processing plant.  Pitch is solidified coal tar, which has a couple of curious properties that make it useful.  The first is that it has a relatively wide melting point that depends on the purity of the distillate during fractioning in a refinery.  The second, more important aspect is that like other complex hydrocarbons it has a “carbonizing temperature” where the material transforms into a high-carbon solid called “coke” that cannot be melted again.  So, you have this material that is shipped in bulk form as an amorphous solid called “pitch chips” which look like small black glassy shards.  These usually come in by river barge where they are unloaded by a kind of vacuum lifter assembly out of the  cargo hold and onto a conveyor.  The material is then moved up into a large dry bulk storage unit until needed for an order.

This is where my control system came in.  The pitch chips are loaded into a 50,000 gallon melting tank by another belt system coming from the storage units.  To heat this much mass, nine electrodes are used.  Each solid electrode is 10 meters long and about 35 centimeters in diameter.  I do not have many images of the the site, but here is one showing the essentials.  The black enclosure is a dry storage unit.  The narrow white tanks are for storage of compounds used to modify the nature of the pitch.  The two larger white tanks are the melting tank and holding tank.  The melting tank has its nine electrode head-ends visible in a row along the bottom.  Once the liquid pitch is ready, tanker railcars or trucks were filled using the loading arms, held held flexible delivery pipes.   The holding tank was used to store an order that was already prepared, while a second order could be mixed and held in the melter.

Now these electrodes are heated using electric furnace transformers that take 600V three-phase AC (Canada, remember) and use 400kVA SCR power control cabinets to drive the transformers such that the secondaries developed about three volts at five-thousand amps.  Each tank had four control systems available, though typically once the material was heated to the target temperature only one system was needed to keep things stable.  Not pictured is the capacitor bank used to counteract immense reactive load.  It had a power factor correction system built in that would engage and disengage various capacitor cabinets to maintain a power factor as close to 1 as possible.  The time of day and season also mattered as the incoming power would droop during high demand period and float well above 600V in low-demand periods.  In addition all of the piping that circulated the pitch between tanks, loading assemblies and the blender (behind the tanks) had to be heated.  This was done in sections using smaller pipe-heating transformers and single-phase power controllers, with about 22 pipe heating systems for the melter side and 12 systems for the holding tank side.

I was going to talk about hazards on such a job site, but I’ll save the two events that happened here for next time.  One was in 1991 during the initial  start-up, and the other was in 1993 when the facility was expanded.  I will offer only one tibdit.  A “NEMA 10” cabinet is designed to withstand an explosion.  This ended up being tested empirically.  Stay tuned!  –Crow

Comments Off on Mostly True Tales: On the Hazards of Field Work, Part One