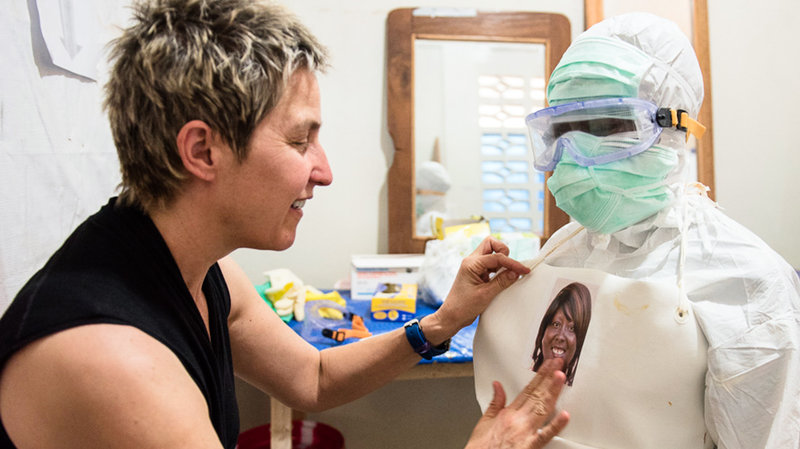 npr has a great story on artist Mary Beth Heffernan and her idea to put photos on ebola suits.

How often does this happen: You’re listening to a news story describing some problem halfway around the world and you say to yourself, “I know how to fix that!” It’s not your area of expertise. It’s not a place you know. But you are sure that if you went there you could solve the problem.

Los Angeles artist Mary Beth Heffernan is the rare person who decided to actually give it a try. Last summer, Heffernan, who is also an art professor at Occidental College, became obsessed with Ebola — particularly the images of the health care workers in those protective suits, or PPE as they’re called for short.

“They looked completely menacing,” says Heffernan. “I mean they really made people look almost like storm troopers. I imagined what would it be like to be a patient? To not see a person’s face for days on end?”

And what really got Heffernan is that as far as she could tell, there was an easy fix.

Here was her idea: Snap a photo of the health worker with a big smile on their face. Hook up the camera to a portable printer and print out a stack of copies on large stickers. Then every time the worker puts on a protective suit they can slap one of their pictures on their chest, and patients can get a sense of the warm, friendly human underneath the suit.

The timing was good. She had a sabbatical coming up and a $5,000 grant to work on an art project. She decided to use the money to get her photo kits to West Africa. This would be her art project.

I had to ask Heffernan: How is this art?

She explains: “This is in the spirit of social sculpture. This is part of that history of making art that’s about action, about changing society.”

Soon Heffernan’s kitchen table was piled high with printers to test and applications for more funding. But her biggest challenge was connecting to the people who run Ebola treatment centers.

She reached out to 75 people. And in mid-January, one of her emails reached a key official in Liberia: Dr. Moses Massaquoi, the Ebola case manager for the country.

Massaquoi says Heffernan wasn’t the first person to write him pitching some untested scheme. In fact, it was getting to be kind of a pain.

But Massaquoi says Heffernan’s proposal stood out. He’d worked in Ebola wards and the photos made so much sense. He wrote back immediately. 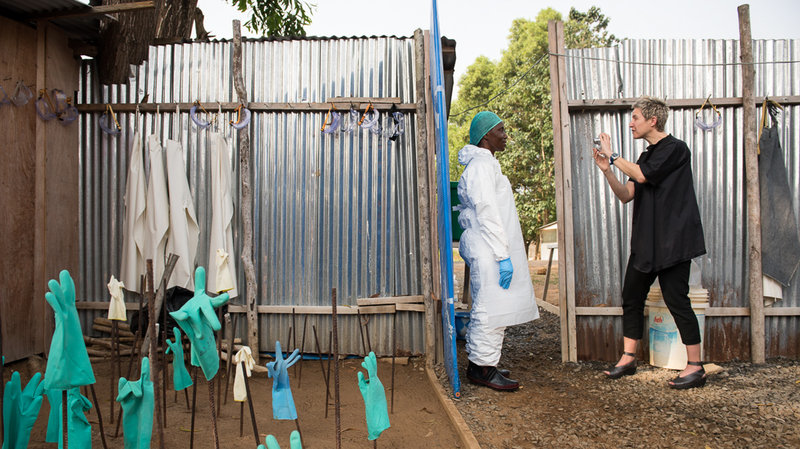 Comments Off on An Artist’s Brainstorm: Put Photos On Those Faceless Ebola Suits #ArtTuesday